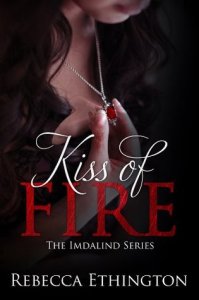 Synopsis: Joclyn Despain has been marred by a brand on her skin. She doesn’t know why the mark appeared on her neck, but she doesn’t want anyone to see it, including her best friend Ryland, who knows everything else about her. The scar is the reason she hides herself behind baggy clothes, and won’t let the idea of kissing Ryland enter her mind, no matter how much she wants to.
The scar is the reason she is being hunted.
If only she knew that she was.
If only she had known that the cursed stone her estranged father sent for her 16th birthday would trigger a change in her. Now, she is being stalked by a tall blonde man, and is miraculously throwing her high school bully ten feet in the air.
Joclyn attempts to find some answers and the courage to follow her heart. When Ryland finds her scar; only he knows what it means, and who will kill her because of it.

Get it on Amazon: http://amzn.to/1Pvtnp5

I think I found a new author to squee over.  I’m already in love with this book, I’m already in love with this series.  I think there are about 5 books in this series and I will read every single one. This book was very steadily paced.  It had a really good flow.  I just couldn’t get enough of it honestly. I’m a little infatuated with this author.  It’s very suspenseful. It builds and it builds, but it’s not building so slow that you get bored, it keeps you engaged as you read.  I don’t even have to tell you how many times I have read a book that is suspenseful but it just seems like it’s the same thing, but with this one I enjoyed it. This author has a great way with words. She expresses her characters emotions very well.  The metaphoric representation of the hoodie in this book was very interesting to me.

The character of Joclyn herself, I’m not really sure that I like her. I like her story, but I’m not so sure that I like her as a character.  She comes off a bit whiny to me, a bit too insecure for my tastes. I like to have a strong heroine in a book, and she is not very strong at all. I expect that to change, you know, world building, character growth and whatnot.

Ryland!  (I love the name Ryland, it’s very original) He has this charisma about him that I flocked to in this book.  But he seems to not notice it at all, it’s almost like, he’s got blinders on when it comes to himself. He only sees Joclyn and the things he sees in her are things I do not see. It’s curious to me as a reader because I wanna know what he knows, what makes her so special.  There’s a lot of secrets in this book. It’s one of those books that the reader finds out things as the main character.  Sometimes I like that and sometimes I don’t, in this book I do.  You can’t really predict how the plot is gonna go, Kudos to the author on that. I had no idea honestly.  The ending is kinda of a cliffy.  I expect that with a long series like this.

Ovailia’s features were refined, her high cheek bones and cat-like eyes giving her the look of aristocratic beauty.  Still, somehow, her attitude ruined it and turned some of her striking elegance to rubbish.