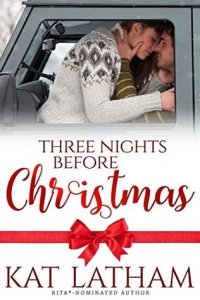 Have yourself a steamy little Christmas…

After three years in prison, freight train engineer Lacey Gallagher doesn’t expect this Christmas to be very merry and bright. At least chopping down trees for her brother’s Christmas tree farm will help her save money to get her life back on track. All her plans derail, though, when her new job puts her in territory patrolled by the man who haunts her dreams—the forest ranger who sent her to prison.

Austin Wilder isn’t thrilled about Lacey working in his forest—but he soon realizes he needs her help. His family is depending on him to restore an old steam train for a spectacular Christmas event, and train expert Lacey is his only hope of finishing in time.

Working together challenges every assumption Lacey and Austin have about each other, and they discover a desire hot enough to melt even the deepest Montana snow. But will the season of second chances be enough to mend the most hardened broken heart?

Find it on Goodreads: https://www.goodreads.com/book/show/27278596-three-nights-before-christmas
Order it on Amazon: http://amzn.to/1meyzl4

My Review:
3.5 stars — After reading His Christmas Gift by Sarah Mayberry, I knew I wanted to read the companion story about Sawyer’s sister, Lacey.  And it was a steamy, quick holiday read!  I loved the premise of the book — an ex-con (if wrongly convicted) being released after 3 years in prison, and her developing relationship with one of the officers who helped put her away.  I had a bit of a problem with how their relationship started — I guess b/c Lacey was already having hot sweaty dreams about Austin practically right from the start, and I just found it hard to believe that lust could overcome the circumstances surrounding who they are to each other.  But then again, my feelings for a person always influence how attracted I am to them.  And unless I’m remembering wrong (I feel like I’m getting a cold, so I’m not trusting my brain right now), the way he described her wasn’t all that attractive either.

So yeah, the start of their relationship was a bit harder to believe.  Once we got into them working on the train though, things started to pick up.  I still never felt completely invested, but I can’t quite figure out why.  On the other hand I completely devoured the book, so I’m a bit confused about how I actually felt in the end (hence the middling rating).

Lacey was an intriguing heroine — I really enjoyed how real her emotions were with coming to grips with being out of prison again.  She could sometimes be a bit crass, and I couldn’t decide if she made me laugh or cringe sometimes.  Austin was harder to get a read on, but what I did learn I liked.  And once their romance started to move forward, I enjoyed his sweet feelings for her.

I found the ending to be a bit unbelievable with his testimony…I give it a bit of a pass though, since it’s a holiday romance and I’m feeling generous.

All in all, a solid holiday read, it was just missing that extra oomph to push me into loving it.