Couldn’t help myself, had to go back to reread this book since I kept getting glimpses of Adam and Corey in the rest of the books, and I wanted to relive the magic. 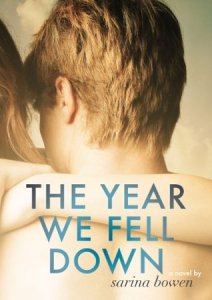 The sport she loves is out of reach. The boy she loves has someone else. What now?

She expected to start Harkness College as a varsity ice hockey player. But a serious accident means that Corey Callahan will start school in a wheelchair instead.

Across the hall, in the other handicapped-accessible dorm room, lives the too-delicious-to-be real Adam Hartley, another would-be hockey star with his leg broken in two places. He’s way out of Corey’s league.

Nevertheless, an unlikely alliance blooms between Corey and Hartley in the “gimp ghetto” of McHerrin Hall. Over tequila, perilously balanced dining hall trays, and video games, the two cope with disappointments that nobody else understands.

They’re just friends, of course, until one night when things fall apart. Or fall together. All Corey knows is that she’s falling. Hard.

But will Hartley set aside his trophy girl to love someone as broken as Corey? If he won’t, she will need to find the courage to make a life for herself at Harkness — one which does not revolve around the sport she can no longer play, or the brown-eyed boy who’s afraid to love her back.

My Review:
4.5 stars — OK, so if you’re a rare reader of my reviews, you will know that cheating is a button issue with me. I’m not saying it will always ruin a book for me, but it’s unfortunately likely. And so regardless of the great reviews I’ve read for this book, I was extremely worried about the cheating aspect. And I can’t quite articulate why, but it didn’t hit me as hard in this book. Maybe it’s because the rest of the book was just so right up my alley? Maybe it’s because it only really came into play in one instance, and I expected the way it would play out? I can’t say it was the perfect result for me, but it didn’t push me over the edge like I expected….

So after that long introduction, can I just say that this book was exactly what I was needing. I don’t know what was wrong, but I had been having a hard time getting absorbed into books lately. I read this one in one sitting. Sucked right in from the first page. The characters were rich and three dimensional. I LOVED the friendship relationship between Hartley and Corey….and you could totally feel their relationship changing and developing (even if Corey always had an epic crush). Their chemistry was off the charts – both as friends and as lovers. While Hartley was an absolute idiot with how he handled the Stacia situation — I guess I bought into the explanations that were given and how it fit with his character. And when they finally did get together, it was so obvious how in love he was with Corey, that I might have swooned a bit.

The secondary characters were fantastic too — which of course makes me desperately want to read Bridger’s book, and makes me wish that Dana had her own book too.

I can’t speak for how accurate all the stuff with Corey’s injury was, but I really liked how it was always there, but at the same time it wasn’t all that Corey was about. And while normally I might get annoyed with how she saw herself, it felt realistic to me, so I bought into it.

So why round down instead of up? Pet peeves my friends. Obviously I wasn’t completely happy with the Stacia situation, and would have appreciated a less cheat-y resolution. I wasn’t always a fan of the Hope Fairy either (you’ll understand if you read it). And for the love of all that is holy, the Pittsburgh PUFFINS??? WTF? I don’t even understand how the author got that wrong and still expected me to believe the hockey fandom. It would have been ok if she was making up an entire league, but the Bruins and the Rangers were both mentioned, so why in the world did she get Pittsburgh wrong? And not just once, but consistently. And I’m not even a Penguins fan!! OK, rant over…

So yeah. I can see why this book might not be to everyone’s tastes, but it won me over in a big way. And selfishly, that’s really all I care about. The rest of the books have been wishlisted….will definitely be reading more of this author.