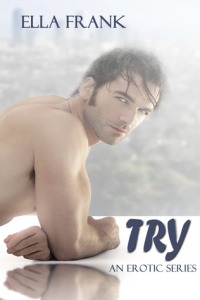 Try – verb: to make an attempt or effort to do something or in this case…someone.

Sex. Logan Mitchell loves it, and ever since he realized his raw sexual appeal at a young age, he has had no problem using it to his advantage. Men and women alike fall into his bed—after all, Logan is not one to discriminate. He lives by one motto—if something interests you, why not just take a chance and try?

And he wants to try Tate Morrison.

Just coming out of a four-year marriage with an ex-wife from hell, a relationship is the last thing on Tate’s mind. He’s starting fresh and trying to get back on his feet with a new job at an upscale bar in downtown Chicago.

The only problem is, Tate has caught the unwavering and unwelcome attention of Mr. Logan Mitchell – a regular at the bar and a man who always gets what he wants.

Night after night Tate fends off the persistent advances of the undeniably charismatic man, but after an explosive moment in the bar, all bets are off as he finds his body stirring with a different desire than his mind.

As arrogance, stubbornness and sexual tension sizzles between the two, it threatens to change the very course of their lives.

Logan doesn’t do relationships. Tate doesn’t do men. But what would happen if they both just gave in and…tried?

My Review:
3.5 stars — So I was honestly all over the fucking place with this book (excuse the language).  I ended this book and overall felt I’d enjoyed myself — so I was initially thinking 4 stars.  But here’s the thing — the book ends on a cliffhanger of sorts (middle of an unanswered question), and I didn’t immediately want to snatch up the next book…and that doesn’t seem like a 4 star experience at all then.  And then I started reading reviews on Goodreads (which is always a bad idea before I’ve gotten my thoughts out), but I was just curious how others felt (and I think I was trying to figure out if I wanted to read the next book).  And I could agree with things from both the good and the bad reviews (and this book really does seem to be very polarizing — lots of mega fandom and lots of hate).  So I just sat there.  Stumped.  And I’m still kind of stumped.

So here’s the thing — there’s a LOT of sex in this book…and it is an erotica, so that makes some sense.  And in general the sex was actually really hot and steamy for me.  But there got to be so much of it, and each encounter was quite long, that it got a bit mundane somewhere along the way.  I did appreciate that there was a progression to it for the two men, so it didn’t feel like “straight Tate” went from zero to gay in 2 seconds.  There was a lot of experimenting, and getting used to it.  But wow, were these 2 insatiable.

And I actually enjoyed the interactions between Logan and Tate — they had some good banter, and even their fighting was kind of hot and volatile.  And I enjoyed the few moments we did get where it wasn’t just about sex — like their first “date”, or the coffee shop incidents.  But inevitably even those just led to sex.  It was like you would maybe get a glimpse of something more to their relationship, but then nope — back to sex.  And I love to read about sex, don’t get me wrong…but it’s nice to feel other things between your characters too.  What else, besides sexual attraction, was drawing these two together?  So I ended up feeling unfulfilled…I think that’s what had me baffled at the end.  I wanted something more.

There were little things that bugged me — how come they kept having meetings with the ex-wife, but then nothing would happen at those meetings?  Just felt like a plot device to bring more encounters between Logan and Tate in a different setting.

And in the end the thing that has me rounding down instead of up was the ending.  I mistakenly didn’t look and realize this was a series, and so to have it just end so abruptly kind of turned me off.  And from what I read the 2nd book ends the same way.  That’s not enticing to me.  And maybe if there was more development in the *romance* department in the next book, I’d be more interested…but from my quick scanning, I’m not sure that it’s a whole lot different than this book…just new complications.

At least it wasn’t a total failure like some other books I’ve been reading lately, but I am sad that it wasn’t all that and a bag of chips for me.

One thought on “Try by Ella Frank”