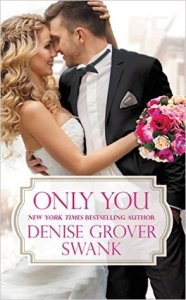 Romance isn’t an option for Holly Greenwood. With her wedding planner career on the line she needs to stay focused, and that means pleasing her demanding boss, not getting distracted by her mind-alteringly hot neighbor . . .

Ex-Marine Kevin Vandemeer craves normalcy. Instead, he has a broken-down old house in need of a match and some gasoline, a meddling family, and the uncanny ability to attract the world’s craziest women. At least that last one he can fix: he and his buddies have made a pact to swear off women, and this includes his sweetly sexy new neighbor.

After one hot night that looks a whole lot like a disaster in the light of day, Kevin and Holly are about to learn that true love doesn’t play by the rules . . .

Up to the end this was a solid 4 star book for me.  Fantastic rom-com with likeable characters and great chemistry.  I was sucked in from their first awkward encounter.  It might have even been more than 4 stars if they had had more encounters earlier in the book.  It felt like two separate stories for a while and as this is a romance, I was kind of chomping at the bit to see them interacting in any way, shape, or form.  But once they did get together they were pretty great together.  It was definitely one of those books that followed a lot of romance cliches, but being a romance lover that stuff doesn’t tend to bother me too much.  And there were plenty of scenes that had me just grinning away!

And then the ending happened, and I just found I wasn’t satisfied.  I felt like it was rushed, a bit too much of a stretch (even for a rom-com lover such as myself), and I lost the magic somehow.  So that was a little disappointing.  I think I’ll still round up to 4, because the rest of the book was solid, but yeah…

Great supporting cast — loved seeing Megan again, she is such a hoot.  I’ve only read book 1 in the Wedding Pact series, but I thoroughly enjoyed getting a glimpse at some of those characters again.  And Matt and Tyler presumably get their own stories in this spin off series, so I’m looking forward to checking out their stories as well.

All in all a solid read only marred by an ending that didn’t quite do it for me.

4 thoughts on “Only You by Denise Grover Swank”