OK, super funny story.  I saw this as a recommended romance request on one of those NetGalley e-mails I usually ignore.  And it sounded really good, so I took a chance requesting it, even though I wasn’t sure what the publisher’s approval preferences were.  So I was pretty stoked when I was approved.  I saw the release date was only 2 days later, so I figured I should get going on it (because I feel inherently guilty when I don’t get them done in time because, you know, free book).  It was only after finishing the book today that I realized the release day was from *2015* not *2016*, so this was one of those older books on NetGalley that I’d stumbled upon.  I mean, still yay because, you know, free book…but now I feel a bit sillier for rushing.  Though the archive date is coming up, so there’s still that.  Anyways, this was just a random aside for people who like to watch me babble.  😛 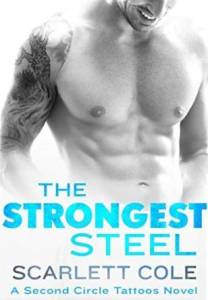 Harper Connelly never expected to find herself outside of a tattoo parlor at one in the morning, summoning the nerve to take back her past. She’s determined to forget her old life and is looking for an artist who can tattoo over the scars on her back.

Trent Andrews, local legend and owner of the Second Circle tattoo studio, has his own reasons for specializing in inking over scars. And in spite of her mysterious past and the difficult road ahead, he quickly realizes that Harper is funny, smart, and–under her ridiculously oversized clothing and SPF 100 sunscreen–totally hot. He’s happy to take on the challenge of designing a meaningful and deadly full-back tattoo for her.

But when cryptic messages start appearing on Harper’s phone, strange deliveries arrive at her door, and Second Circle is vandalized, Harper is convinced that her ex-boyfriend has tracked her down, and worse, that he knows about Trent. Running was the only thing that saved her last time, but now that she’s started to put down roots in Miami, she’ll have to decide if she can finally fight back instead.

Thoroughly enjoyable romantic suspense!!  It kind of felt like some of those Harlequins I used to read and adore.  I understand this is the author’s debut, and I thought it was solid and engaging.  I actually thought it had an extremely strong beginning — I was sucked in and really liked the style of writing.  It wasn’t too descriptive (which I’m not fond of), but managed to balance out with enough to really give me a feel of the environment, the characters, the feelings, and all that good stuff.

It was actually setting up to be a 4.5 or 5 star read, but it fizzled out a bit more towards the end for me.  I’m still trying to figure out why, but I think I was less impressed with the relationship drama…not that there was a lot of that, it just felt a little cliched with the lack of communication and stuff.  I also kind of wanted more resolution with the Nathan storyline, but perhaps that will be hinted at in later books?  I’m definitely putting them on my wishlist.

I loved watching Harper open up and flower into the person she was meant to be — to watch her heal.  At the beginning I thought the pacing was perfect and realistic and believable….a bit later it felt a bit more rushed, but honestly, what do I know about what’s realistic in that situation?  So all in all I thought the little steps she took to reclaim her life, starting with the tattoo were perfect and rewarding and made me cheer for her.

In a similar vein, I loved how Trent was with Harper…how he tried to use humour to make her feel at ease and, quite frankly, he charmed the pants right off of me.  He was a perfect balance of sensitive, empathetic, sassy (or whatever the male equivalent of that is), and he pushed her boundaries to get her to step it up a bit at a time.  I was a bit less impressed with some of his choices and words later in the book, but that might be just me.

I will say that I was *not* impressed with Trent’s insistence that Harper needed a tan.  Both for him being so superficial to think that.  And because I have personal experience with skin cancer and truly believe there’s nothing wrong with wanting to protect yourself from it.  Mini rant over.

On a totally different aside, LOVED the tattooing aspect of the story.  As someone who is intrigued by the world of tattooing, and loves the ones I have, I loved the perspective on tattoo artists, why they do it, what they might love about it, all that stuff.

Solid cast of secondary characters.  I’m actually more interested in Pixie and Lia’s books (which are books 3 and 4) than I am with Cujo and Drea’s.  I love Cujo, but I didn’t really love the two of them together from what we could see in this book.  It’s a personal taste thing.  So we’ll see if I can score that book on sale at some point, so I can still get the full Second Circle experience.

All in all a fantastic romantic suspense.  Definitely put more books from this author on my wishlist for the future.

6 thoughts on “The Strongest Steel by Scarlett Cole”