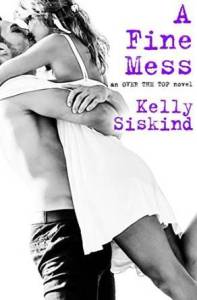 Some guys should come with a warning label . . .

Sawyer West is Mr. One-Night Stand. He doesn’t do relationships or promises or feelings. He’s never cared enough to get involved. Until Lily Roberts. She’s sweet and shy and sexy as sin, and resisting her is testing his self-control. She believes Sawyer can be a better man, and for the first time in his life, he wants to be. But change isn’t easy, and Sawyer would do anything to protect Lily from his past self. Even break his own heart . . .

OK, I will admit that that blurb leaves a bit to be desired.  I wasn’t even sure if I was interested when I came across this browsing through NetGalley, so I went to Goodreads to skim some reviews already posted for a bit better taste of what the book was about…b/c that blurb just didn’t really make it stand out, kwim?  Then I saw this quote in someone else’s review and I was sold: “keep that up, babe, and I’ll come in my swimsuit. I’d rather not find out if sharks are attracted to semen.”  I don’t know why that made me laugh, but honest to goodness, that’s why I clicked request.  I decided I needed to know Sawyer.  And in the end, Sawyer made this book for me…  But I will say that this book is a whole lot deeper than the blurb makes it out to be…a lot more emotional investment, and not your typical playboy hero with a sweet girl.  So give this one a longer look my friends, it was worth it.

OK, so a) I totally didn’t know this was another Canadian book, but I was super stoked that I somehow came upon it anyways!  I know that in the end the Canadianness is extremely minor and no one would notice, but I’m a strange nationalistic patriot, and it tickles me when I can support authors from my country.  Plus, she mentioned Caramilks and Crispy Crunch’s.  Awesome.

I don’t know why I said a) like that.  I don’t think I have a b).  I don’t see my review going that way, but instead of erase it and fix it, I’m just going to babble about it.

This was a book where I didn’t read the first in the series yet, but other than getting tiny glimpses of how the first couples HEA played out, I don’t feel like it ruined it for me.  In fact, that baby is now wishlisted and I will likely read it in the future to find out the details of Shay and Kolton’s love story.

This book was a strange one for me in that I was so over the top (pun intended) for Sawyer, that his POV chapters alone made this book like a 10 star book…  Like Sawyer is now on my book boyfriend list…you know, if I had one where I actually kept track of this stuff.  I can’t tell you how much I adore him, though I will likely attempt it further down.  Lily, on the other hand, I just had a harder time making a connection with.  I’m not sure if it was me or the mood I was in, but I found certain parts of this book to be slower reading for me.  I just wasn’t fully engaged.  It’s weird, b/c honestly Lily had an extremely intriguing background and set of her own “issues” to deal with.  And I usually love the shy awkward girls, but for some reason I just wasn’t full blown enamoured with her.  Which is not to say that I didn’t like her as a character, it was just not love for me.  Like on paper she had a lot of great characteristics, but it just wasn’t magic for me.  And so this book took me longer to read than I was expecting.  I’m still trying to pinpoint why, but maybe it was just the mood, and no amount of Sawyer awesome could make up for it??

I loved the chemistry between them, and I loved their interactions, but I will say that oftentimes that was because of the things that Sawyer would say and do.  It all comes back to that boy.  I mean, I was hooked from the first Sawyer chapter.  He just has an internal dialogue that drew me like flies to sugar…moth to a flame…you know, one of those catchphrases.  And it wasn’t just his hilarious (and often horribly childish) sense of humour.  He was so vulnerable and broken and my heart just ached for him and how the events of his childhood shaped how he viewed relationships and all that.  And yet he still tried.  And he still made mistakes, and I was still mad at him, but it was consistent to his character you know??  GAH!  I want him.  Like seriously, back off Lily, MINE MINE MINE.  And the superhero powers all the time??  ADORE!!!  Gush gush gush…I could just gush about him all day long.  I wanted to highlight everything he said, but in the end I think I only highlighted one thing to show the kind of writing that was in his chapters: “She tastes like salt and beach and summer, her body writhing beneath me as I take my time.  Devotion isn’t quick business.  It requires dedication.  Fervor.  Absolute commitment.  I plan on graduating top of my class.”  It’s not even the best line, but it’s just this great voice, you know?  OK enough.

So yes.  I thoroughly enjoyed myself.  Will definitely be giving this author another look.  Loved the sneakpeak into Raven and Nico’s book, can’t wait to get a glimpse inside Nico’s head.

Also: Sawyer is mine.  In case that wasn’t clear.

4 thoughts on “A Fine Mess by Kelly Siskind”