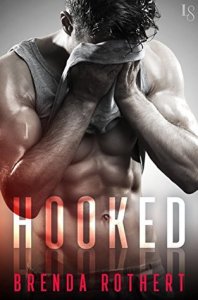 From the author of the On the Line and Fire on Ice hockey romance series comes a sultry novel featuring a brooding NHL player who’s hell on skates—and the no-nonsense woman who forces him to clean up his act.

Miranda: Even though I’m broke, putting myself through college, and working two jobs, I’m trying to make the best of it. Meanwhile, Jake Birch, hockey’s hottest bad boy, lives in a luxury hotel in downtown Chicago—and still complains about every little thing in his penthouse. But after I tell him off, instead of getting me fired, Jake requests me as his personal housekeeper. Then he starts flirting with me. Only I’m not flirting back . . . at least, I’m trying not to. Did I mention that he’s hockey’s hottest bad boy?

Jake: I’ve met the best woman at the worst possible time. Miranda is the fire to my ice—a sexy, charmingly candid spark who breaks down my walls and reminds me what it’s like to feel again. But I’m being forced to date my team owner’s daughter to keep my job, so I can’t be caught with Miranda. Still, we’re getting closer—until Miranda finds out about my “girlfriend.” And that’s not the only secret I’ve been keeping. But Miranda’s the one I want . . . even if she doesn’t believe me.

OK, this was way more than I was expecting from this book!  I don’t even know why…I hadn’t reread the blurb since I requested it a few months ago, so I honestly didn’t remember what this book was even about!  And quite frankly that blurb doesn’t even do this book justice.  This book had so many layers, and the characters were really interesting and flawed, and I just LOVED going on their romantic journey with them.

Miranda was sassy and strong and independent and a bit cynical about men, but I really just loved her.  I got behind pretty much all of her decisions and reactions.  And I honestly believed her slow falling for Jake.  Which is funny because I was NOT a fan of Jake at the beginning.  He was such an angry, dickish jerk!!  He was exactly what Miranda calls him.  And yes, he amused me, but I didn’t see how I was going to love him…honestly, I was a bit sad b/c I wasn’t sure how the book was going to go.  But then Ms. Rothert brilliantly starts showing us little bits of MORE to Jake, and I was intrigued.  I started to see why he is the way he is, and while it doesn’t excuse his behavior, I got it.  And I really loved that his personality didn’t just turn around on a dime…he was still kind of a dickish jerk, even right til the end.  It was just that we got to see that there was more to him.  Heck, I think even *he* got to see there was more to him if that makes sense.  It was like Miranda opened up a piece of his heart and showed him all that was underneath.  I LOVED seeing all his vulnerable sides.  While I didn’t cry, I definitely teared up at so many moments in this book.  I was not expecting that!!  But I really got the feels.  And seeing him make such an effort with Miranda to be romantic, he kind of made me swoon.

The other girl thing was odd.  It was a bit crazier than I was expecting.  But it didn’t necessarily detract from the story, and I appreciated the way it all played out in the end (and how Miranda handled him, and that it didn’t drag out).

All in all this was a serious surprise win for me.  Especially given such flawed characters.  But I just love everywhere this story went, and I was just happy to be along for the ride.  Will definitely be looking for more from this author in the future.

4 thoughts on “Hooked by Brenda Rothert”