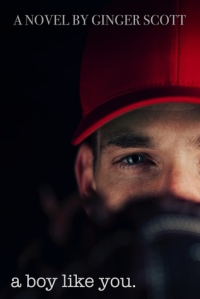 They say everyone’s a superhero to someone. I’m not sure who I’m supposed to save, but I know who saved me.

We were kids. His name was Christopher. And up until the day he pulled me from death’s grip, he was nothing more than a boy I felt sorry for. In a blink of an eye, he became the only person who made me feel safe.

And then he disappeared.

Now I’m seventeen. I’m not a kid anymore. I haven’t been for years. While death didn’t take me that day, the things that happened left me with scars—the kind that robbed me of everything I once loved and drove me into darkness. But more than anything else, that day—and every day since—has taken away my desire to dream.

I wasn’t going to have hope. I wouldn’t let myself wish. Those things—they weren’t for girls like me. That’s what I believed…until the new boy.

He’s nothing like the old boy. He’s taller and older. His hair is longer, and his body is lean—strong and ready for anything. I don’t feel sorry for him. And sometimes, I hate him. He challenges me. From the moment I first saw him standing there on the baseball field, he pushed me—his eyes constantly questioning, doubting…daring. Still, something about him—it feels…familiar.

He says his name is Wes. But I can’t help but feel like he’s someone else. Someone from my past. Someone who’s come back to save me.

This time, though, he’s too late. Josselyn Winters, the girl he once knew, is gone. I am the threat; I am my worst enemy. And he can’t save me from myself.

My Review:
5 stars — I received a free copy from the author in exchange for an honest and unbiased review/opinion.

OK, so I was freaking HOOKED from the prologue.  And not just by the action and plot, but I always forget the way Ms. Scott write’s characters, and just the way she writes in general.  I don’t know what it is about it but it just gets me every time, and I’m sucked right into the story.  And seriously, like from the first page, I had a feel for who 8 year old Joss was, and I could picture their childish games, and the dynamics of their group, and just everything.  It was the absolute perfect way to start the story.

And then we dive into present day, and my heart just aches for the 16 year old (or however old Junior year is) Joss, and how unbelievably damaged she is, and how I could totally understand why she is the way she is, and why she acts the way she does.  She was so hard on the outside, and destructive, and just…I just got it, you know?  And I could feel all her emotions, and how she saw her life and how she saw herself.  She was an amazingly well described heroine, who I couldn’t help but love despite not being anything like her.  I felt everything with her, and that’s always the best journey an author can take you on.

And the cast of secondary characters was full and varied as well.  From her friends, Taryn and Kyle, and how the each interacted with Joss and helped or hindered her.  To the new boys, TK and Levi, who added to the Wes storyline, and gave such a great look at family (their father as well).  To her softball girls, who weren’t present a lot, but added to the depth of her story.

And then there’s her father.  Gah.  I don’t even know what to say.  I hated him.  I hated him, but I understood him, and I was disappointed in him, and I went through all the same emotions Joss went in as the story progressed.

And last but not least there’s beautiful Wes.  Who confuses the shit out of me, but whom I adore and has become one of my favourite book boys in no time at all.  He is just everything that Joss needed.  He is caring, and sweet, and forceful, and he has expectations for Joss.  But he’s left me so confused.  I don’t even know what is going on there.  Is there something more?  Is this more than just a contemporary?  And if it’s not, then what in the world is going on?

I wish I’d had more dedicated me time to read the end of this book, b/c it came out of nowhere and broke my heart and I didn’t get to bawl as I wanted to because I was reading in a public place, and when I bawl I go full on red eyes, look like death warmed over, snot everywhere…

And now I wait.  Damnit Ms. Scott, you are a cruel mistress, but I will keep coming back for more every time.  I highly recommend this book, but if you’re impatient like me, perhaps watch for a release date for book 2, and then devour it just before.

6 thoughts on “A Boy Like You by Ginger Scott”