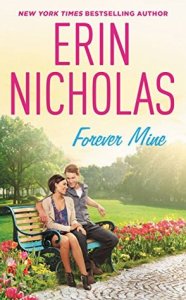 Maya Goodwin doesn’t believe in holding back. Ever. As a cop, she never hesitated to throw herself into harm’s way to save someone. Even after an injury on the job forces her to retire, she’s not afraid to keep risking it all to get the life she wants. With a new career teaching martial arts to kids already underway, she’s looking forward to the future – and taking a chance on the unbelievably hot Dr. Alex Nolan.

Maya – daring and spontaneous – is the exact opposite of what Alex always thought he wanted. But when a nine-year-old daughter he never knew existed shows up on his doorstep, Maya is the one who helps them hold it together. With love on the line, will the guy who’s always played it safe be willing to take the biggest risk of all?

OK, this was a fantastic addition to this series!!  And no, you most definitely do NOT have to read the first book to enjoy this one, but it’s super adorable as well, so I definitely recommend it.

I can honestly say that I loved both characters, and thought they both had some really unique aspects to their personalities, and were really well developed.  Both Maya and Alex were extremely likable, but not without flaws.  And because of those two aspects, it was so satisfying to see their growth over the course of the story, even if there were the occasional bits I wish we’d seen more of.

Maya was seriously badass, but also so satisfyingly nerdy.  She was just ridiculously one of a kind…I can’t even figure out how to describe her.  She’s completely unlike me, but I could really see liking her.  And admiring her.  I kind of wish we’d seen a bit more of her development wrt her future goals…because they kind of changed over the story, but we didn’t see her working that out, it just kind of happened along the way…one of those things that disappointed me.

And Alex was so cautious and meticulous, and eager!  He just kept surprising me along the way.  I loved seeing the little steps he was making forward, even if he was moving a little slower than I’d like, and even if occasionally I wanted to smack him.  But I kind of liked that he was not quite alpha, but not quite beta.  He had his strengths and weaknesses, and he admired the crap out of Maya’s strengths.

And the chemistry between Maya and Alex was smoking and very enjoyable.  But I could also see the relationship that developed between them that was more than just chemistry and lust.

I loved the nerd aspect, and loved some of the introspective commentaries made about the nerd community and why we love superheroes and all that stuff.  It just really felt…I don’t know, intelligent?  Is that insulting to other books?  Or maybe it’s insightful.  Like not just the nerd aspect, but the story as a whole — looking at why people help others, what that says about them, overcoming perceived weaknesses, all that good stuff.

I also really loved the secondary characters in this one.  I loved Maya’s group of friends, and that they are important to her and an integral part of her life.  I enjoyed Rachel, and was surprised that I did.  She was a bit too good to be true at times, but I actually enjoyed that it wasn’t a big dramafest and she really added to Alex’s life.  And Charli was pretty cool.  I loved how important she was to Alex, and how he was just so enthralled with her, but he eventually learned the importance of the dad role.

I did notice that occasionally things would happen that didn’t make sense in the timeline that was in my head, but perhaps that will change in the final copy.  It’s just that sometimes some events would be only days apart when I’d been given the impression it was more like a few weeks.

On a weird side note, I was surprised that none of the girls knew what hemophilia was, since I did…but I did an internet poll, and while the majority of my friends did know, there were a few that didn’t so I can accept it.

All in all I’m really loving this series.  I sincerely can’t wait for Sophie’s story if it’s anything like the first two.

4 thoughts on “Forever Mine by Erin Nicholas”