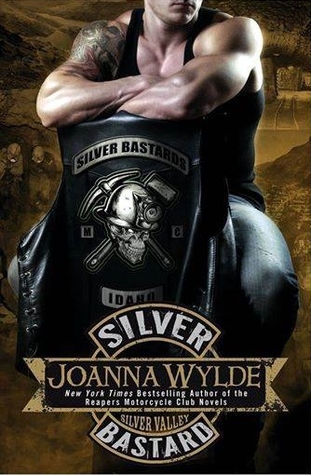 Blurb:  Fourteen months. For fourteen months, Puck Redhouse sat in a cell and kept his mouth shut, protecting the Silver Bastards MC from their enemies. Then he was free and it was time for his reward—full membership in the club, along with a party to celebrate. That’s when he saw Becca Jones for the first time and set everything in motion. Before the night ended he’d violated his parole and stolen her away from everything she knew.

Five years. It was five years ago that Puck destroyed Becca and saved her all in one night. She’s been terrified of him ever since, but she’s even more terrified of the monsters he still protects her from… But Becca refuses to let fear control her. She’s living her life and moving forward, until she gets a phone call from the past she can’t ignore. She has to go back, and there’s only one man she can trust to go with her—the ex-con biker who rescued her once before.

Puck will help her again, but this time it’ll be on his terms. No more lies, no more tears, and no more holding back what he really wants…

This is another audio book that I chose from my Overdrive account. (An amazing app that allows you to listen to books for free through your library card) And I  know I’m not supposed to start new series but I needed another book to listen to.  And I liked the cover. I have a kinda sketchy past with MC books.  There was only one MC book that I recall liking.  So I figured I’d try a different format.  This was my last ditch effort before I threw in the towel on this genre.  I can gladly say that it worked.

This book was f-ing amazing! The voices are what really pushed it over the edge.  This book was a dual POV and it was read by a male and female.  These fucking readers you guys…  IDK who read them but I’m gonna look them up.  They read it so well.  I felt the characters, I felt the anger and the betrayal. I felt the chemistry and sexual tension between the characters.

The woman especially did a really good job I think.  Each voice was distinct and had a unique pitch and accent.  Even the male voices sounded real and it was astonishing how many inflections she could do. I’ve never heard so many different voices come out of one person in my life.

The guy was great to. I’m not trying to knock him but there’s only so high a males voice can go.  So when he did the females voices it wasn’t as seamless a transition.

The story itself was a predictable read…except the ending.  I totally bought into the story, but there was one point at the end that really shocked me.  Kudos to that author for that. The cool thing about it is it tied up all the loose ends so I don’t have to read anymore in the series.  And I’m not going to because I’d had my fill of this story line and world and have no interest in returning.  The beginning was very graphic and intense so people who are not into that kind of stuff I would not recommend this for you.