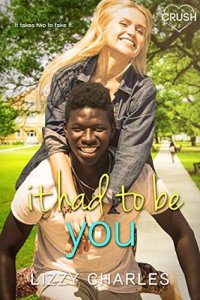 James Parson has a problem. His military dad is going to yank him out of his expensive boarding school if James doesn’t prove he’s no longer hooking up, pulling pranks, and charming his way out of consequences. What better way to show he’s now responsible than becoming the committed boyfriend of a U.S. diplomat’s daughter?

Level-headed, book-smart Edelweiss may have traveled the world thanks to her dad’s job, but when it comes to friends and boys, she knows exactly nothing. Newly enrolled in boarding school, Edel is now on a mission to learn it all. James says he’ll help her experience the ultimate high school life—if she’ll be his fake girlfriend. And fake is perfect, because he’s exactly the kind of player she’d never date.

I will wholeheartedly admit that there were a few things in this book that on another book would probably have bothered me more, but I just couldn’t help but devour this book and end it with a big smile on my face.  And I think that’s because there were just that many things to love, and that I got enough pleasant surprises that it made me gloss over the things that usually annoy me.

So let’s get the lamesauce stuff out of the way.  The niggles:
a) Lack of communication.  Yeah, there was some of that, but it didn’t bother me quite as much for some reason, maybe because I was getting other stuff from the romance, and it didn’t last like the whole book?  But it did bother me a little…it’s frustrating when assumptions are made on both sides and that’s what prevents the couple from getting together.
b) Over the top evil/witchy with a b girl.  Emma was seriously over the top.  I’m not a fan of that.  I didn’t even see any depth in her to explain why she was that way, she was just a straight up mean girl.  I guess those girls exist in real life, but I’m kind of tired of that.
c) The situation with Emma became a bit implausible, and I’m not sure I enjoyed how that all played out and was handled.
d) A few little things were dropped or not followed up with how I expected.  Like we’d suddenly be a week later, and I kind of wanted to know how things developed in between time (like after the hair, or even right after they agree to fake date).
e) Some of the twists felt a bit convenient, especially since we’d find them out at convenient times as the story went on (Julie, some of the Ainsley stuff including the Foster Mom).

OK!  That’s done!  I know that seems like a lot, but please remember they were little niggles that only slightly detracted from the awesome.  So what was the awesome?  Great characters that surprised me at different turns!  I enjoyed the fact that James wasn’t a horrible bad boy, but more of a guy who made some poor choices, or got pulled into the “need to impress” that many teenagers feel in high school.  He was seriously so much deeper than I had been anticipating.  I LOVED that we got to see how his family life affected him (having a military father, no mother), how his race affected him, how being biracial with a white father affected him.  I appreciated those little touches and that they weren’t glossed over.  I loved that we got to see real emotion in him, particularly wrt his father.  I loved that he made some monumental mistakes, which I know sounds weird, but I loved that he owned up to them and tried to make amends.  I loved that he really was genuinely trying to change.  I LOVED that he was a literature nerd, I would have enjoyed even more from that.  Basically he really impressed me with how much we got from him in just a short novel.

Then there’s Edel.  Not to be left out, Edel was pretty well rounded as well!  I enjoyed her unique situation, and how her life growing up shaped her, and how she desired normal teenager experiences.  I loved that she was pretty naive, it really fit with what I expected from her.  But she was also brave and strong at times too, and I thought she grew as the book went on.  She had typical teenage girl feelings, and they still existed right to the end.  I loved that we got to see bits of her relationship with her parents.  And she also made mistakes, one big one in particular.  I did enjoy how she stepped up and did the right thing eventually, and didn’t shy away from it.

And the two of them together were super adorable.  I LOVED the tummy tingles I got just from the hand holding.  And I loved the way they stuck up for one another, particularly how Edel championed James.

I also really enjoyed the secondary characters, though I wouldn’t have minded a bit more.  But I wonder if we didn’t get more because this is going to be a series and we’ll eventually get their own stories?  I sincerely hope so.

So yeah.  May have had a few pitfalls, but the good just made me so happy that it was a success!!

2 thoughts on “It Had to Be You by Lizzy Charles”