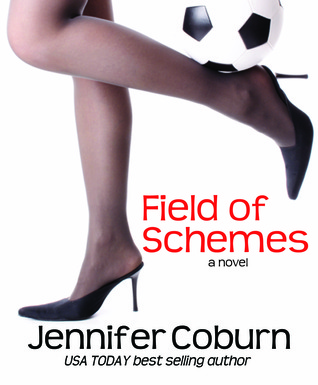 Blurb: Newly widowed Claire Emmett leaves Los Angeles so she and her eleven-year-old daughter, Rachel, can have a fresh start in the picture-perfect suburb of Santa Bella, California. But the simple, quiet life she seeks is nowhere to be found in the town where soccer is king and parents are far, far too involved in children’s sports.

When Rachel is scouted for an elite travel team, Claire is sucked into a world of high drama, backstabbing and deceit. The team manager plots a Wall Street-style hostile takeover. Parents sabotage players, serve as sports agents, and trade sexual favors for playtime.

Off the field, Claire must navigate the brave new world of the suburbs and build a life that doesn’t revolve around kids’ sports. Nothing is simple in Santa Bella, though. Claire’s neighbor is an outrageous flirt. She stumbles upon some dark secrets and unwittingly becomes the target of a very powerful enemy.

As Rachel’s team moves to the State Cup championship, Claire must develop a game plan of her own. It’s time for her to fight back and show her daughter what it means to be a soccer mom who plays to win when it matters most.

Originally, the title, cover and blurb drew me in.

But…..It was slow, and the same things kept getting repeated. Like how hard it was for her to move on and the fact she likes to run away when things get tough.  They just didn’t seem to be progressing fast enough to hold my attention.  And I guess I have an issue with this but….the TELLING! OMG, there was so much telling.  I was just not interested enough to move past the slow parts.

2 thoughts on “Field of Schemes by Jennifer Coburn”