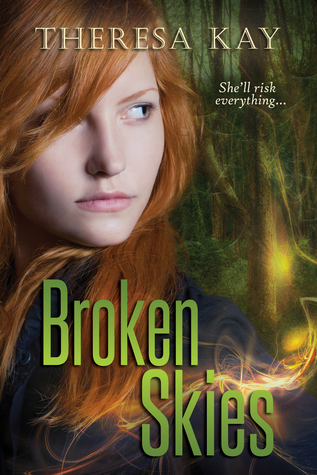 Blurb: Thirty years ago, civilization collapsed. Few survived.
Ten years ago, the aliens arrived…and stayed.
One year ago, I killed two men and went a little crazy.
Today, the aliens took my brother and I will do anything to get him back.

Until recently, the E’rikon have remained segregated in their city and ignored the few humans who have tried to engage them… but now they have taken Jax’s brother. To rescue him, she forms an uneasy alliance with a teenage E’rikon left stranded in the woods. She agrees to guide him to the city if he sneaks her past the human-proof barrier. Too bad it’s not that simple.
Jax, who cannot stand to be touched, finds that she’s drawn to the alien boy with bright green hair and jewel-like scales on his back. And he’s equally affected by her, the courageous redhead with haunted eyes. But she doesn’t know the alien’s true motives and he has no idea that she is much more than she seems.

With the aliens and the humans at odds, the connection forming between the two teens has consequences. What started off as a rescue mission sets a chain of events in motion which threatens not only the remaining humans and the growing alien society, but Earth itself.

~I just realized I never posted a review for this book on our blog! ~

This kind of book is my favorite. Aliens, sci-fi and post apacolyptic. Trust no one. Evil is about. That is what this book screamed to me as I read it. Ooooooh! I love when evil is about. It had it all, equal parts action, love, war, internal strife.

Jax had it hard. Like post apocolyptic hard. The background was detailed and I totally felt a connection with Jax. We are like BFF’s now. In fact, I may have a bit of a girl crush on her.

Jax is a bit of a bad ass. She finds paths when none seem possible. She perserveres when all is hopeless. I admire her greatly. She doesn’t use her past as an excuse to give up. She goes on. It’s hard, but anything worth doing is right? Even when she has no idea what she is doing, she doesn’t allow the idea of failure to settle in her mind. Its amazing really. She just steamrolls on.

Lir is the like a warm sun to her dark cold night. Fire and ice people. He has a close, loving family. A promising future within his community and an easy going personality. He would have to after the crap that happens to him at camp. He is down to earth and protective without being pushy. He lets her in and shows her it is okay to trust.

Flint was a favorite supporting character. Jax and he have a sibling like relationship. He looks out for her and she has no appreciation for it. If you have siblings you understand.

Her bio-brother is pretty cool too. They are twins and they have that spooky twin thing which I love. It was just them two for the longest time so they know they can rely on each other. He is a bit over-protective since her incident. Oops, nuff said on that.

The bad guy is pretty evil. He has control issues and seriously needs to talk it out with a shrink. Maybe he wasn’t loved enough as a child.

I have read this book a few times and it never gets old, so you should go read it too. Just saying.