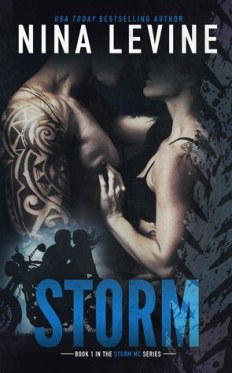 Blurb: Life can be a bitch but love can get you through any storm.

Madison Cole’s family is the Storm Motorcycle Club. Her father is the President and her brother is the VP. She grew up surrounded by bikers, crime and violence. Two years ago she walked away from her family and the world they live in. Her soul was shattered, her heart was broken and she had an addiction she couldn’t shake. She picked up the pieces and put herself back together. Now her family wants her back. The club is being threatened and they send a club member to return her home to safety; the one person that could destroy everything she has worked so hard to build.

Jason Reilly has sacrificed a lot for the motorcycle club he calls family. Two years ago he made the biggest sacrifice of all; he gave up the woman he loved for them. Now he is being sent to bring her back and he is conflicted. He thought he was over her but discovers their connection is as strong as ever. Their love was all-consuming, passionate and fiery. It was also their undoing and he doesn’t know if either of them is strong enough to battle the demons that ripped them apart, to find love again.

Madison and Jason are brought back together by a force out of their control; one that pushes them to a breaking point. Can they overcome their past and discover a love worth fighting for or will the harsh reality of their world finally and completely break them both?

I gave up at 32%. I tried to get into this book, really really hard.  I love an alpha male as much as the next gal.  But there was too much telling and not enough showing.  Add to the fact that the back story could have been a book on its own so the information that I was plied with in the beginning was a lot to take in.  The terrible things she went thorugh were too glossed over and just made me feel they were added for shock value.  The story didn’t need them to be what it was.  In short I couldn’t see myself getting inton it and after a third of the book, I had to put it down.

This book is free so if you want to give it a go, be my guest. 🙂 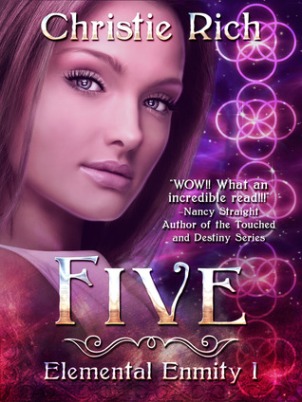 Blurb: Rayla Tate dreams of escaping her ordinary world for a bright future in the art world. Throw in an overbearing aunt who is keeping major secrets, a disgruntled best friend tagging along to college, and a bunch of fae warriors waiting in the wings to claim her the minute she leaves her sleepy little town, and Rayla’s dreams are about to shatter.

She soon discovers she is a coveted Elemental with power she never knew she possessed–a power that could change the world. Everywhere she turns another man tries to woo her. The weird part is she’s drawn to each one of them. Who are these strange men, and what dark power do they hold over her? Rayla must quickly learn to fend off these beautiful and seductive pursuers using any means necessary or find herself lost to the fae world forever.

I just couldn’t get into it.  Rayla wasn’t believable to me and the story itself was pretty slow.  Add the info dumps here and there and I just wasn’t interested in what happens to her at all.  Cassie was too wishy washy.  Zach was flat as the male lead. The story didn’t flow very smoothly. It seemed that the author expected the reader to infer much of it.  That’s fine by me, I’m not one of those readers who expects everything to be spelled out for her. I do expect some things to be made clear, especially in the beginning.  It just didn’t work out for me.

But hey, it’s free so if you want to check it out and see for yourself.  It has quite a few 4-5* reveiws. 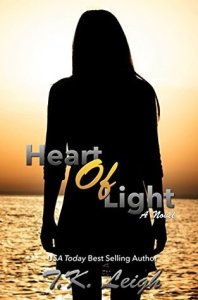 Jolene Bergio has spent the last twelve years of her life asking one question… Why? Why was she left in the custody of a man who would sell her each and every night to the highest bidder? After a few years, she shut off, giving up hope that anyone would ever find her. Until her luck changed one night and she escaped.

Twelve years later, she finally feels something she hasn’t felt in a long time… Free.

Scared that her past will find her unexpectedly, she hides away in a rented beach house, trying to distance herself from everyone… Until Dr. Cameron Bowen enters her world and slowly tears down the walls that she has built up over the past twelve years of her captivity. Jolene begins to learn to love again.

But when a man from Jolene’s past emerges, will she be able to keep her identity hidden? When lies are told and hearts are broken, will the truth surface in time to bring Jolene back from the shadows that threaten to expose who she really is?

My Review:
No star rating.  DNF @ 22%.  This was another author who was going to be at an author event I’m planning on attending, so I wanted to read her book before then.  I have a bunch of these, so I was rereading some reviews on Goodreads to try to decide what to read next (especially since I haven’t been having great luck with new authors lately).  I ended up finding some negative reviews that left me feeling somewhat dismayed and wary…and unfortunately I ended up agreeing with their initial observations, and even had my own set of things that went wrong for me in this book (and led to me DNFing it).

So right from the first few pages I found the switching of POVs to be haphazard and without a clear indication.  Usually I read books from 1 or 2 POVs (since I read a lot of romance, it’s the hero and heroine in most cases — sometimes with one or two other characters jumping in).  In the first 3 pages I think I read 4 different POVs, and there was no extra space when changing POVs, so all of a sudden it was just someone else.  We had the heroine, then the housekeeper, then the security guy, then back to the housekeeper, then the boss guy, then the housekeeper’s husband….  It was very muddled and I was not a fan of this style of writing.  It takes me out of the story.

Then there were the main characters themselves — the way they were portrayed felt very flat and shallow to me, and their emotions were beyond volatile.  I guess I just like a bit more depth and nuance….  Jolene in particular wasn’t very likable, and I just never really got behind her actions.

And then we get to the complaints that other folks have — Jolene spends a LOT of time talking about how she can’t tell anyone her name (which is totally understandable), but instead of making up a new identity or something, she just refuses and refuses (making everyone suspicious) and then like later that day she’s told 2 people, and confessed her whole story to another woman.  Um what?  That didn’t sit right with me.  Maybe it wouldn’t have been so bad if she hadn’t repeated OVER AND OVER how she couldn’t tell anyone her name…to have her just trust people so quickly just felt unrealistic.  She’s also really enthralled with Cam’s silver eyes already, it just feels like everything was moving at a really rapid pace.

I was mildly curious about what would happen plotwise, but the characters and writing style bugged me enough that I figured it wasn’t worth my time, especially with the ginormous number of other books I have on my TBR pile. 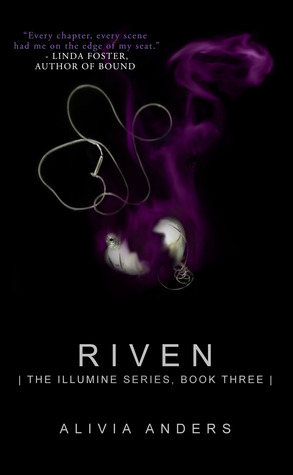 Synopsis: The third installment of The Illumine Series.

Captured, imprisoned, and left to burn.
You know what they say- where there’s smoke there’s fire…

For the last two weeks, Essallie Hanley has been a prisoner, in more ways than one. Held hostage by the Queen, she is forced to endure the mind-numbing pain tearing her body- and soul -apart, killing her with every tick of the clock. It seems all hope is lost, until one chance moment gives Essallie a name, Rinae Decante, the final person needed for the Queen to unveil her master plan to end Essallie. Armed with this name, and with the help of Ari and Kayden, Essallie breaks free from her captivity and launches in a search for this mystery girl.

But their search doesn’t go as smoothly as planned, and the three soon find themselves fighting against an impenetrable course of fate aimed to destroy them all from the inside out. When Essallie falls victim to her altering soul, they all begin to wonder of there’s any chance at all to save themselves from the burning effects of their actions.

Love, lies, and betrayal.
No one is safe from the undoing of secrets surrounding Essallie.

I DNF’d this book at 30 percent.  I just couldn’t get into it.  It felt like work and this is my pleasure activity so I gave up.  I might try to go back and read it again because after the first two I had certain expectations for this book.  I want to try and let those go before returning to this one.  Might is the key word in that sentence.