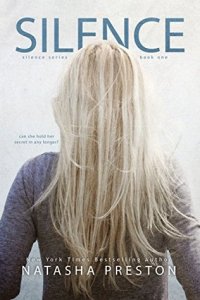 For eleven years, Oakley Farrell has been silent. At the age of five, she stopped talking, and no one seems to know why. Refusing to communicate beyond a few physical actions, Oakley remains in her own little world.

Bullied at school, she has just one friend, Cole Benson. Cole stands by her, refusing to believe that she is not perfect the way she is. Over the years, they have developed their own version of a normal friendship. However, will it still work as they start to grow even closer?

When Oakley is forced to face someone from her past, can she hold her secret in any longer?

This book reminded me a LOT of The Boy Who Sneaks in My Bedroom Window.  The relationship between Oakley and Cole and how it develops, and the damage done to Oakley, were surprisingly similar in feel.  That’s another book that I can’t necessarily say is superbly well-written (lots of editing issues common in early self-publishing), but I just LOVE it, you know?  Like a guilty pleasure.  And it was the same for this book.  I was super intrigued by Oakley’s secret, and didn’t even mind TOO much the way it was revealed slowly over the course of the first half of the book, though the false leads were a bit annoying.  And I really adored the sweet nature of Oakley and Cole’s relationship, and how close they could be without her ever speaking (or communicating in any way really).  I actually really believed that he understood her based on years of paying attention to her body language and facial expressions.

But here’s where this book falls short of TBWSIMBW: the pacing.  Seriously, that is my number one issue with this book.  I found I was staying up reading just to finally find out what happened, what was going to happen, b/c we know from the blurb that her past is going to catch up with her.  Seriously, I was like “OK, more relationship, more normal everyday, more sideplot…anytime now…”  I don’t think it was until like 87% that we got even a hint of the dark turn, and that’s just not enough time to give what should be a satisfying climax a lead up and solid conclusion.  And it really wasn’t.  It was super rushed.  I’m torn about how it all happened…there is a part of me that loves it, but there is another part of me that’s wholly unsatisfied that we didn’t hear from Oakley.  And then the ending.  OMG.  I don’t think I fully realized this was a series, or maybe I thought it was a series of connected characters, but nope…the ending is abrupt and unsatisfying.  Not a cliffhanger so much as a non-HEA.

And so there I am, laying in bed, just bummed.  Because you know what?  Even not having read the second book, I can tell that it didn’t need to be a 2 part divided story.  There was so much repetition in the meat of the book that really could have been pared down.  I enjoyed getting to see the emotional impact of what Oakley went through, but I still think it could have been shaved down and still been effective.  And I didn’t mind not knowing the details of what happened, b/c that’s a bit hard to take, and I enjoyed the focus being on how it impacted Oakley’s life.  But there was so much extraneous material in the book that honestly could have been either taken out or, for goodness sake, it should have had a purpose!  Like Julian!  What the what?  What was the point of that storyline?  Either it should have had a conclusion and a development that made sense, or it shouldn’t have been that large.  And Lizzie?  What was with that?

So while I would really *like* to have the conclusion of Cole and Oakley’s story, from what I can gather from looking at the lower starred reviews of the next book (when I take out all the annoying reviews that just talk about the grammar…seriously, that’s the whole reason you rated it 1 star?  Why did even read the second book then?), the pacing is fairly similar and unsatisfying.  So it’s not really worth it for me.  Maybe if it was free, but it still costs my time, you know?

Weird review right?  It was a weird reading experience.  To have so much love for the characters and to be simultaneously sucked in and impatient, it’s just odd.  It’s happened to me before, but it is always vexing when it does.  Oh well.  *shrugs*  I don’t regret it, I just wish it had been better.  Especially because I enjoyed the handling of the tough topic.

4 thoughts on “Silence by Natasha Preston”