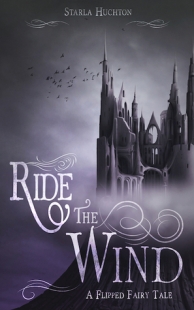 Once upon a time, I made a promise to a stranger. Though I’d never seen her face, I cared for her above all others.

Once upon a time, I broke my vow. In trying to save the one I loved, I condemned her to a cursed life and stripped her of all freedom in a single, misguided step.

Once upon a time, I set out on a journey. Though it might never earn me forgiveness, I would set her free or die trying.

My Review:
4.5 stars — Well that was utterly enchanting. Oh, and before I go on, I received an ARC from the author for me to review!

I have to admit some truths before I begin:

Truth #1 — while the concept of the Flipped Fairy Tales that Ms. Huchton writes have had me completely intrigued since I met her at UtopYa this year, this is in fact my first book by this author. And it won’t be my last.

Truth #2 — I know NOTHING about the original fairy tale this book is based off of. About halfway through the book I became curious, and started to look it up, but I didn’t want to ruin the story for myself, so I held off.

Truth #3 — this book is so totally out of my wheelhouse, that I’m actually surprised by my thorough enjoyment. What do I mean? I’m a modern setting/writing kind of girl. I tend to steer clear of historical books and high fantasy, and I prefer…I don’t know how to describe it…. I just can get a bit lost and lose interest when the manner of speech and voice is more formal? maybe? I just end up sticking with contemporary settings, or if they’re futuristic settings, then more casual or “normal”. I’m probably bumbling this up, but please tell me you know what I’m talking about? So this book was a little bit outside of the norm for me. I think it’s that usually I find it really hard to relate to the characters if I can’t imagine myself in the story. So I’m desperately trying to figure out what made this story stand apart for me. B/C I couldn’t really see myself in the story, but I was epically immersed all the same.

I think my enchantment starts with the unique and captivating plot. I was telling my husband about the story and mentioned that it was a bit more fantasy like. But one thing that stands apart is that the hero doesn’t have magical powers and this destiny to be a great hero. He’s just a boy who holds strong convictions, has a beautiful heart, and suffers for the mistakes he makes. So he’s kind of an everyman in some ways. He’s so easy to empathize with, and you’re given ample opportunity to get to know him in the first half of the book. And in that way you’re invested in him as a character and so you root for him through the second half of the book. And I just realized I started this paragraph talking about plot and have somehow devolved into talking about my favourite part of a book — characters. (Oops.) It’s not that Lukas is without flaws. But he’s endearing all the same. And the same goes for the Elk and Erata — flawed characters, but with enough heart to make us love them. And it’s not just the main characters that stand out. Lukas meets so many people along his journey, and they all had their own unique voice.

The world building in this story was also strong — we traveled to so many different places, and I could imagine each one. I even feel like I spotted the setting (and a character) for the next Flipped Fairy Tale, so I’m anxious to learn if I’m right about that.

I have but one complaint — and it’s really more about my personal taste than anything. I could have used a smidge more in the romance department. What can I say, I’m a diehard romantic — and I just felt more in the friendship chemistry department than in the romance one….either that or I just wanted MORE. But maybe it wouldn’t have fit in with the story, what do I know?

This was a solid YA adventure. If you’re a fan of fairy tales AT ALL, I definitely recommend this read….you won’t be disappointed, and if you’re like me, you’ll be looking to read the rest in the series to devour a bit more magical awesomeness.

3 thoughts on “Ride the Wind by Starla Huchton”