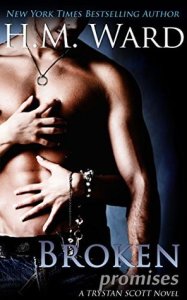 Before the billionaire playboy rose to stardom, we were friends for a while and lovers for a night. Though that was nearly a decade ago, our connection burns brightly in my memory. We weren’t a one night stand, not to me.

I can admit it–I got played. To him, I was just another conquest. My beautiful best friend is long gone, and I’ve moved on. But when fate forces us to meet face to face, everything I felt for him comes rushing back.

Trystan is crashing and burning fast. The press flock like vultures, waiting for him to kill himself or worse. Either way, his mistakes earn them millions.

One night, one time, one word is all it takes to wash away a decade of reason and regret. One secret threatens to push him six feet under, and, when those beautiful eyes turn to me for help, how can I say no?

My Review:
2.5 stars — I’m a fast reader normally.  But rereading this series (which I probably gave higher stars than they deserved, but maybe b/c I thought something good would happen at the end) and reading this book has proved to me that I’m only a fast reader when the story is compelling.  I read it because I needed to know how Trystan and Mari’s story ended up, but I was disappointed.  Majorly disappointed.  There wasn’t much of a Trystan and Mari love story at all.  Mari is with someone else.  For like 80% of the book.  So if you were hoping for all the grown up romance, you’re probably going to be disappointed in that aspect.

I’ve discovered that I don’t think Ms. Ward’s writing style is for me.  I don’t have the patience.  This is basically like a soap opera in book form.  And that’s just not for me.  No disrespect to people who like that, there are lots of readers who do!  I just don’t happen to be one of them, so I don’t think I’m going to invest in anymore books by this author.  We’re just not a match.

Things that didn’t work for me (spoiler free): The lack of romance.  Supposedly there is a connection between them, but I felt it more in the previous series.  So on that note, if you do want to read this book, I HIGHLY recommend you read the accompanying Secret Life of Trystan Scott novella serial series to get the most out of it, otherwise you’ll be feeling lacking.

Things that didn’t work for me that are SPOILERS, so don’t read this paragraph unless you’ve read the book or don’t plan on reading the book: 1) The paranormal aspect.  I mean, seriously?  They can feel each other’s feelings through touch?  No.  Either write a paranormal or write a contemporary…I like both, but don’t add a touch just because you can’t write the appropriate chemistry between them.  2) Seth.  I was mad when he died.  And for god’s sake, if you’re going to have that be a mistake, then put some effort into it and make it believable, don’t just throw it in at the end so it’s all one big happy ending.  3) I wasn’t super keen on all the Derrick being Trystan’s brother thing, but I mostly wasn’t happy with the half-brother turning out not to be an abusive jerk too when all signs pointed in that direction.  Very inconsistent with what we learn of his character earlier on.  4) Derrick throws her engagement ring at her, and she still says yes?  Um, what?  5) She watches Derrick abuse his mother, and doesn’t tell him off?  And she’s still going to marry him.  Great backbone.  You need him to hit his mother before it’s too far?  *sigh*  6) Where’s the resolution with her father?  He was an abusive asshole who seems to still be an abusive asshole, but then it’s all “I love you Daddy” at the end?  Great character and relationship development.  7) Trystan’s father kidnaps him, after almost killing him, and the mother really wouldn’t have called the cops?  And since he apparently never changed his name, she really couldn’t find him all that time?  What about when he became famous?

Basically the problem is lack of believability.  It was a lot of sensationalism and shock value thrown in a pot without background and rationalization.  Heck, even the blurb is a bit misleading.  Strangely I didn’t have as much problem with Trystan’s issue that had him get in the accident.  I saw a lot of other reviewers were bothered by it, but it would have been ok without everything else heaped on top of it.

I just don’t have the patience for this kind of story if you’re not going to give me a good dose of romance to keep me happy.  OK, I’m tired, and this is sounding ranty, so that’s it for me.  Just not my bag, baby….