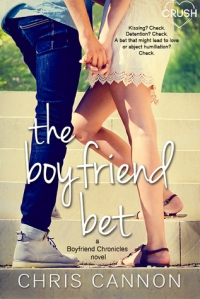 Disclaimer: This Entangled Teen Crush book contains multiple PDAs, after-school detentions, and gambling on the side. Warning: betting on a boyfriend is bad for your health.

Zoe Cain knows that Grant Evertide is way out of her league. So naturally, she kisses him. Out of spite. Not only is Grant her brother’s number-one nemesis, but he has zero interest in being tied down to one girl. She’s shocked—and secretly thrilled—when they start spending more time together. Non-exclusively, of course, but that doesn’t mean Zoe can’t change his mind, one PDA and after-school detention at a time.

Zoe’s brother claims Grant is trying to make her his “Ringer,” an oh-so-charming tradition where a popular guy dates a non-popular girl until he hooks up with her, then dumps her. Zoe threatens to neuter Grant with hedge clippers if he’s lying but Grant swears he isn’t trying to trick her. Still, that doesn’t mean Grant is the commitment type—even if winning a bet is on the line.

Well…huh…  So I started this book and I was just thrilled!!  I was LOVING it!  I thought Zoe was so sassy and snarky, and I loved the bantering interplay between her and Grant.  Honestly I was smiling and laughing all the time.  I know Zoe was a bit dramatic, but honestly I just thought she had a bit of a temper and was a bit over the top.  She and her BFF Delia was so much fun.

But somewhere along the way it started to lose a little bit of the sparkle.  Honestly, Grant was not book boyfriend material.  We got less and less of his POVs as the book went on, and quite frankly he just never seemed that enamoured with Zoe.  It was like he was intrigued, but he kept weighing pros and cons about being with her, but there was no overall excitement, or just *want* to be with her.  I never felt it.  I enjoyed it in the beginning a bit more, but I expected things to develop, and for him to be maybe confused b/c he didn’t want a girlfriend, but Zoe made him feel differently.  I just didn’t get that at all.

And while Zoe’s reactions were a bit over the top, quite frankly I got why she was upset in so many of the instances…she just liked being dramatic in her reactions, but the base reason for being upset was valid in my opinion.  And so I was not impressed with how the last bit played out where Grant accused her of not trusting him, even though he hadn’t earned that trust through past experiences, and she ended up being the one to apologize and make amends.  Did NOT work for me.

And then the end just wrapped up super fast, I didn’t buy their relationship development at ALL, I didn’t even buy that Grant wanted to be with Zoe.  And quite frankly, I thought Zoe could do better.  So my reading experience went from a 4 to a 3.5 rounded up to 4, to a me being generous and still giving it 3.5 but rounding down to 3.  Major bummer b/c it started off SO well.

3 thoughts on “The Boyfriend Bet by Chris Cannon”