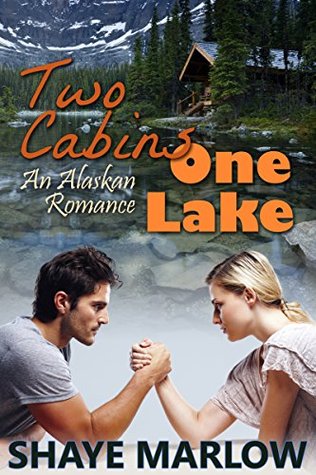 Blurb: Helly is a volatile blonde with a passion for fishing, a grudging tolerance for the fishermen she guides, and a part-time job putting her sexual fantasies in writing. She lives a quiet life in the Alaskan bush, alone on her little lake with only a spooky dog and her gun collection for company.

But then Gary, the most obnoxious man Helly’s ever met, roars into her life. The mysterious helicopter pilot moves into the cabin across the lake with a vengeance. And fire. And karaoke. He’s a despicably early riser with a penchant for public indecency, a talent for trespassing… and he’s handsome as the devil, with abs she’d like to lick.

Helly quickly realizes her little lake isn’t big enough for the two of them. After an initial attempt at being reasonable, and responsible, and mature, she gives up—and gives as good as she gets. What follows is a feud of eardrum-battering intensity; a no-holds-barred water fight to the tune of a screaming chainsaw, with her panties caught in the crossfire.

Just when Helly thinks things couldn’t possibly get any worse, her crazy brothers crash the party. In an unforgiving land where even the wildlife is out for blood, can the pair survive long enough for Gary to capture Helly’s heart, along with her wrists? Or will Gary’s past be the final blow, after Helly loses her boat, her dignity, and what’s left of her ammo?

For lovers of Alaskan romance and romantic comedy, Two Cabins, One Lake is a sexy, standalone contemporary romance novel with action & adventure, a splash of mystery & suspense, and a satisfying conclusion. Take a vacation to Alaska, where everything’s bigger & wilder, and you’ll laugh out loud!

How about the simpler ‘Let’s be fuck buddies’? See, that felt pretty good. Fuck buddies, I could do. I’d just tell him not to talk to me unless he was growling dirty nothings in my ear. No conversation outside of sex. I didn’t want to talk to him; I just wanted his body.

I loved this book.  I’d seen it advertised on my kindle a few times and thought the blurb was decent.  I tried to find it on my own with no success, then it showed up on my kindle again so I thought, “it’s meant to be read!”  And I snagged that puppy up.  Thank goodness I followed the signs, cause this book was amazing!

I don’t know how I never knew this author before.  She is witty, hilarious and knows how to write revenge…or foreplay, however you want to see it.  😉 She doesn’t pull any punches in her writing and I appreciated that.  Like when describing things that were gross or disgusting, she didn’t sugarcoat it, it was straightforward and refreshing to read someone tell it like it is.

Helly is a a wonderful character.  At first she came off  a a bit masculine for my tastes but as I read on it made her more attractive honestly.  She doesn’t pretend to know all woodsy things but the ones she does know, she knows a lot.  I especially loved how she knew how to fish, gut and shoot like a sniper but couldn’t figure out why her car wouldn’t start.  It wasn’t an all or nothing character if that makes sense.  She had some vulnerability but for the most part she was a vicious defender of her space and no amount of wild animals or men were going to intimidate her or scare her into submission.

Gary is a mans man.  He is broad, agile and knows how to use hand tools and guns. (A man after my own heart!) And he didn’t go easy on Helly just cause she was a girl.  He treated her the same as the other men, well, except for the sexy times. 😉  Which there were  A LOT of.  And each one was more adventurous and hotter than the last.  My goodness, I usually get tired when they put sex in a lot of the story but this was exhibitionist at its best and brightest.

And the brothers!  Oh my gosh these guys picked on their little sister so much, but she gave as good as she got!  They had the best campfire stories about torturing Helly as a kid but when it came to protecting her, they did that with all they had as well.  They were hilarious and original and had their own personality that shined through quite handsomely.  I like Rory myself.

I’m going to immediately read it again because I love this story so much!