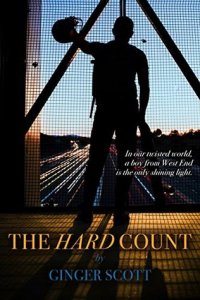 Nico Medina’s world is eleven miles away from mine. During the day, it’s a place where doors are open—where homes are lived in, and neighbors love. But when the sun sets, it becomes a place where young boys are afraid, where eyes watch from idling cars that hide in the shadows and wicked smoke flows from pipes.

West End is the kind of place that people survive. It buries them—one at a time, one way or another. And when Nico was a little boy, his mom always told him to run.

I’m Reagan Prescott—coach’s daughter, sister to the prodigal son, daughter in the perfect family.
Life on top.
Lies.
My world is the ugly one. Private school politics and one of the best high school football programs in the country can break even the toughest souls. Our darkness plays out in whispers and rumors, and money and status trump all. I would know—I’ve watched it kill my family slowly, strangling us for years.

In our twisted world, a boy from West End is the only shining light.
Quarterback.
Hero.
Heart.
Good.
I hated him before I needed him.
I fell for him fast.
I loved him when it was almost too late.

When two ugly worlds collide, even the strongest fall. But my world…it hasn’t met the boy from West End.

Oh yeah.  This is totally my kind of book.  I mean, it hits so many of my buttons!!  It has the kind of YA romance that just makes me want to happy sigh and get tingles all over (though it’s not all PG, there’s a bit of PG-13).  It has a great chunk of diversity, and it wasn’t just a character trait, but something that really affected the story.  It was a fantastic sports romance where the sports part actually really played into the storyline A LOT.  It even brought me to bawling at one point.  So let’s just say I’m one happy little reader.

Now as everyone who reads my reviews should know by now, my bread and butter with books is great characters.  If you don’t have that, then you’ll probably lose me.  And Reagan and Nico were FANTASTIC.  I don’t know if I could just vibe with Reagan or what, but I really loved her as my heroine.  She wasn’t the popular cheerleader, but she wasn’t some bottom of the totem pole girl either.  She was a bit of a loner, but that’s just what fit her personality you know?  I loved that she saw so much of what was going on with the politics in a private school, and could see how her family was being pulled apart b/c of those politics (and the strange American fanaticism with football…).  But she wasn’t some meek flower, she totally stood up for herself and got herself into the mix of things trying to help out her family.  I loved that she had this strange relationship with her twin brother, where there was a mix of love and hurt and former hero worship, and how she was adjusting to the changes even he was going through.  I mean, she really comes from a strange home life.  And I liked what Ms. Scott did with that.  I liked that she and Nico both had challenges growing up, but that they were offset by good things (in her case privileges, in his case a caring family and community despite the gangs and stuff).  Anyways, I seem to be getting off on a tangent.  What I’m trying to say is that I really enjoyed who Reagan was, I thought she was a bit unique, and I liked watching her grow and change and learn and all that good YA stuff.

I definitely adored Nico, but there’s a tiny part of me that would have loved this book to be in dual POV so I could have learned even more about Nico.  He was just so strong and principled I guess….he was such a hard worker, and so determined to do the right thing and take advantage of whatever opportunities presented themselves.  And he was so smart.  Seriously, he was just such a great character, I LOVE a book boy that has all those qualities.

And then there’s all the things that make him an ideal book boyfriend — I LOVED the way he flirted with Reagan, and the way their romance developed.  And he was so freaking sweet sometimes!!  You could really feel the chemistry between them.

And great supporting cast as well…from the parents (both Reagan’s parents who had a surprising amount of depth, and Nico’s Mama) to the best friends (Izzy was fantastic, what an interesting foil for Reagan, and Sascha made me want to hug him), to Noah (who, again, had a lot of depth and grew throughout the book), to the whole football gang, from players to trainers.

And speaking of football, it was definitely on point.  Had me on the edge of my seat at times.  And Ms. Scott mixed it with the serious topics (prejudice mostly, with a hint of nepotism) perfectly.  I’m a sucker for those kinds of stories (especially movie wise), and I thought Ms. Scott really made it her own and gave us great characters to root for.

5 thoughts on “The Hard Count by Ginger Scott”