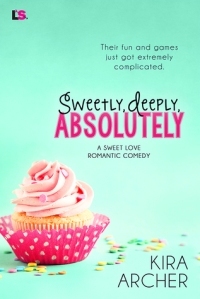 With a month off from culinary school, Jenny Boyd has some serious party plans. Especially when the hottest guy in the club literally lands in her lap. He’s 6’2” of cocky, sexy, man-candy, and just as commitment-phobic as she is.

Graphic designer Jared Crew is shocked when his best friend’s sister-in-law doesn’t remember him right away. Luckily, she is more than willing to let him jog her memory, no complications required.

It’s all fun and games…until the condom breaks.

My Review:
3 stars — I received a free copy through NetGalley in exchange for an honest and unbiased review/opinion.

*sigh*  There were a lot of things going for this book, not the least of which was the fun banter between Jared and Jenny.  But in the end, I just wasn’t captivated.  Now if I can just figure out why.

OK, on the good side is Jared.  I thoroughly enjoyed his charming, flirtatious, playboy self.  He was hilarious when he was trying to be all charming with everyone, and he was just playful and adorable.  I even enjoyed his interactions with Gina (his sort of best friend, and SIL of Jenny).  He just felt like the definition of incorrigible.

On the less good side was Jenny.  As you can tell from the blurb, there is a pregnancy scare.  And while Jenny and Jared basically have the same view on life and relationships (ie fun and casual), when it comes down to the possibility of a baby, Jenny does not give Jared the benefit of the doubt.  She can see herself changing, but she basically assumes Jared won’t, despite what I thought was a lot of evidence to the contrary.  So I was not impressed with her.  Jared may have needed to grow up, but it was a lot of pot and kettle if you know what I mean.  And she was not very nice in her assessment of him.  So in the end, I just didn’t really like her that much.  I also didn’t get a great feel for who she was, sometimes she felt like a caricature, but that could be me.  I seem to be having a problem with my heroines lately, and while I have no problems with a casual fling kind of girl, I just didn’t feel that depth from her…like she was trying to be too many things and…you know what, I have no idea.  Just didn’t work for me.

Not that there weren’t things I *did* like about her — there were!  I loved how she went for what she wanted, and how bold she was with Jared…I was like “you go girl!”  And I really enjoyed how she wanted to work hard at her job and how invested she was in her future.  It was more just that maybe b/c she was at this crossroads, I didn’t fully get all of the different aspects of her.  *sigh*  Whatever.  It’s probably just me.

I was intrigued by the other characters.  I’m not sure if I was enough to want to read their stories though…this author just might not be the best fit for me.  Not when I have so much else on my plate.

And most of that would have probably had it at a 3.5 stars, but then the ending just kind of hit and we were done.  I needed an epilogue or something.  I know, greedy greedy, but what can I say?  I like to see where things are going.

In the end this book was worth it just for the Jared adorableness.  No regrets.

One thought on “Sweetly, Deeply, Absolutely by Kira Archer”