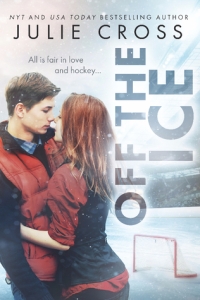 The NY Times and USA TODAY bestselling author of Whatever Life Throws at You kicks off a brand-new series perfect for fans of Miranda Kennealy and Abbi Glines.

Next season was supposed to be his year. Junior Tate Tanley had big plans to ride the varsity bench most of the season, but when the Otters star goalie storms out of the arena during the first home game of the season, Tate is in the spotlight and under the gun.

Enter Claire O’Connor, the girl Tate’s admired for years, his sister’s best friend. Claire’s back from a year away at school to take care of her father and help keep the family business—a hockey bar beside the ice rink—afloat. One semester off, that’s what Claire promised herself.

And then straight back to school, out of Juniper Falls. And she has dozens of reasons for wanting to get the hell out. Again.

Last year, the night before Claire left, she came to Tate’s rescue and what could have been a secret that distanced them ended up drawing them closer the moment she returned to town. For Claire and Tate, leaning on each other feels as natural as breathing but with Claire trying her best to leave again and Tate more rooted to his town than ever, it seems like the worst time to fall in love. Assuming either of them can stop it from happening.

Wow, this book had so much depth and heart.  I think I get used to the Entangled Crush line of books, and I forgot this wasn’t one of those.  This book has two characters dealing with some pretty heavy stuff, and I really loved how the author took us through that and the reactions and actions all made sense to me.  It was just really well done.  It made me feel for both of them, and I was intrigued with how they were dealing with it and how their relationship with each other would either benefit or hinder them.  So it was kind of a coming of age story too…not super overt, but you do see these characters grow and come into their own more.

Before I go into more of what I enjoyed about each character, I will say that the ages in this book were kind of confusing.  At the very beginning Tate says that Claire is only a year older than him, but she’s his sister’s best friend, so I’m going to assume they are around the same age.  But for the majority of the book Tate is in his Junior year of high school, while his sister is in her first year of University.  So isn’t that like 2 years?  And so I never really understand Claire’s year at Northwestern.  Had she graduated high school a year early and gone to University?  Or was she at some special program that was neither high school nor University?  It’s not like it’s a big deal I guess, but it was just something that nagged at me throughout the book.

Claire’s situation was just freaking heartbreaking.  And the author did such a fantastic job of showing the many day to day struggles that a family would undertake in such a situation.  I could totally empathize with what Claire was going through, and how she was feeling about her future, and how torn she was.  Seriously, it was just so spot on.

And Tate gave me all the feels too!!  Seriously, I could totally understand how he was feeling, and why he dealt with things the way he did.  I couldn’t imagine what that must have been like, especially in that town.  And can I just say that he was seriously swoony?  Like kind of a beta boy…or if not beta, omega?  Is that a thing?  He was just so sweet and there was so much there there.

And Claire and Tate together definitely had interesting chemistry.  Normally there on again off again thing would have bothered me more, but it kind of fit for what they were both struggling through in their lives.  I was sometimes a bit disappointed in the time jumps though, b/c I kept wondering what happened in the interim: were they hanging out?  What was the development?

And all the side stuff!!  You guys!  Normally I don’t like a book to be too cluttered up, but it all just fit nicely for me!  I loved the stuff with Mike.  I loved the little bits we saw of Leo and Jamie.  I’m very excited to see if the next books in the series will be books about these other hockey boys.  I even enjoyed the way the Haley thing played out.  It was so much more real, and not over dramatic.  Where it could have devolved into familiar tropes, I ended up being pleasantly surprised.

And the PARENTS!!  I love it when parents play a role in YA stories.  And there are good role models!  I mean, yes, bad stuff too, but just some great stuff there!  Especially with Rodger.  Big thumbs up.

Honestly, the only reason I’m rounding down is because of the mood I’m in.  I didn’t get that 5 star feel at the end, and I think I’m just a bit distracted in my reading right now.  Oh, and the time jumps I guess.  But I can honestly say that I’m looking forward to more in this world.

2 thoughts on “Off the Ice by Julie Cross”