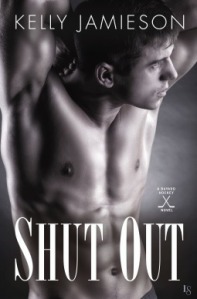 From the bestselling author of the Heller Brothers Hockey series comes the first novel of a new hockey romance series featuring a college team whose players are heating things up both on and off the ice.

The Bayard College hockey team isn’t where Jacob Flass thought he’d be a season ago. He was a rising star in the Canadian major junior league, cruising toward a spot on an NHL roster—until a single disastrous night on the town brought it all crashing down. Now he’s out of options, except for playing well, studying hard, and staying away from girls. He’s not supposed to be flirting with the hottest, sweetest chick he’s ever met. But how could he possibly stay away?

Skylar Lynwood knows that Jacob is out of her league. She’s just trying to go with the flow, which isn’t easy when six feet and four inches of total hockey hunkiness is making a play for her one moment, then giving her the cold shoulder the next. Skylar’s head tells her that this rugged athlete isn’t worth her time, but her body says something altogether different. Risking her heart for Jacob may be the craziest thing she’s ever done . . . but she won’t let him shut her out.

My Review:
3.5 stars — Do you ever finish a book and just have no idea how to rate it?  I’m a gut feeling rater, and this one left me a bit jumbled.  There were a lot of things about this book that I absolutely LOVED!!!  But at the same time, it took me like HOURS to just finish the last like 10%.  I lost my verve for it somewhere along the way.

Let’s talk about about the things I loved first for a change (b/c I usually lead with the bad).  I adored all the little conversations this book ended up having with the reader about very important topics, and I loved the way they were brought up in the book and addressed.  From rape culture to intimate relationship abuse to actual sexual violence for both females AND males to sexual consent to even slut shaming.  I just loved that the conversations were happening in the book, were very important to the story of the characters, but felt natural at the same time.  And we got to see some very different perspectives surrounding this really broad topic, and how confusing it can be, but how important having the conversations and moving our society forward is.  Especially in the context of a college campus.  We even got to see some of the skewed mentality surrounding athletes and how they are treated by the opposite sex, as well as how that can lead to a feeling of entitlement.  The book didn’t provide a bunch of easy answers, but just took a frank look.  And it wasn’t too cheesy, and not too in your face either.  In the end, this was my favourite part of the book.

I also LOVED the bantering between our hero and heroine.  You could feel their chemistry right from the beginning, and I loved that you could see their friendship grow even when they were both consumed with feelings of lust.  But seriously, they were really pretty cute together, and they definitely made me laugh at times.  They did get a bit cheesy at the end, I struggled through some of the dialogue at times when they were professing feelings, but that could have been just me.

And I enjoyed both characters in general.  I wasn’t necessarily in love with either of them, but neither did they annoy the crap out of me.  Not a ringing endorsement, I know, but it’s just the way I felt.  Basically for all the things I loved about each of them, there was something else that bugged me.

For example, I really enjoyed that Skylar was struggling to follow in her sisters footsteps, and had a bit of a crisis over what she wanted to do with her life (balancing parental expectations with her own passions).  BUT it kind of annoyed me that she didn’t talk to them.  I guess that’s kind of realistic, young adults can make some pretty silly assumptions sometimes.  But still.  At the same time I was really impressed with her work with SAPAP and I loved how passionate she was about it.  She really broke it down and made it less awkward, and she was pretty frank about how she was feeling.  I also loved that while we didn’t see her journey with her therapist, you could see some of the positive influences it made on her.  BUT!  I couldn’t help but feel disappointed with the way she handled the aftermath of Brendan’s suicide…and all that shiznit with Ella.  AGAIN, it was probably pretty realistic, but I guess I was wanting something there.  That’s probably more on me than her though.

As for Jacob, well, I had mixed feelings about how he responded after the “incident” that the book opens with.  BUT part of that was because the author chose not to go into details about what happened until MUCH later in the book, and so as a reader you’re left to try to guess at what happened, and so it made it hard to understand his reactions.  At the same time, I LOVED the way he developed as a character wrt all that, and how he responded to the training he underwent, and how he really took that on and allowed it to impact his life in a positive way.  And I loved how dedicated he was to his hockey career, and I really appreciated the conversation he and Skylar had about while he may have talent, he still works really hard to be that good.  I think people forget that about naturally talented athletes.

Things I disliked: how Skylar reacted to Jacob’s secret (not listening to his side is just a big NOPE); the sudden introduction to more of Skylar’s story than I was expecting (kind of came out of the blue, wish there had been hints); some of the talking during sex really ruined it for me (I just can’t read a character saying “Yeah. Oh yeah.” and not want to giggle, it doesn’t feel natural).  Which is not to say the steamy parts weren’t deliciously steamy, I just wish the talking had felt more natural.  Also, they occasionally felt older than 19/20.

I LOVED the guys Jared lives with, and I enjoyed seeing him develop friendships with them.  They were so funny and cute, and I hope to see their stories.  At the same time, maybe due to the nature of Skylar’s story, I was disappointed in the lack of female secondary characters to love.  There were a lot of tiny female parts, but the only major one was Ella, and it was kind of hard to love her.

As an aside, I LOVE reading books by Canadian authors, or about characters that are Canadian…I love seeing things I recognize.  My hubby laughed at me and said now I know how minority groups must feel when they read diverse characters that represent them.  BUT, as a good ole Saskatchewan girl, born and raised, I must say that Saskatoon’s team is the BLADES, Moose Jaw is the WARRIORS.  Tsk tsk.  😛

So yeah.  See?  Conflicted.  Do I round up or down?  I DON’T KNOW!!!  I’m going to round up and say that the awesome amount of *actual* hockey in this sports romance put it over the top for me.  😉

One thought on “Shut Out by Kelly Jamieson”