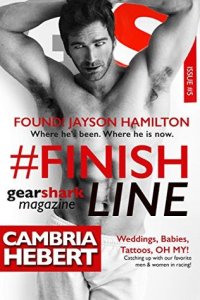 Every race has a finish line.

Where you go after you cross it is what matters most. And sometimes, that’s the most intriguing.

Our interviews barely scratch the surface, offering just a glimpse of the men and women behind the wheel. The discovery of vanished Motocross sensation Jayson Hamilton, who has been right under our noses for years, proves secrets abound.

It’s time to dig deep. Look beyond the racetrack at the drivers who continue to pique our interest. In addition to scoring an exclusive, all-access interview with the elusive Jayson Hamilton (his first and only since the death of his fellow racer and partner Matt Lewis), we’ve caught up with some of our most popular featured men and women in the racing world.

Where are they now?

Who are they now?

What do these hot commodities do when they escape the spotlight?

Rumors of weddings, babies, and new tattoos swirl through the media on a weekly basis. And though we’re headlining the hashtag #Finishline, we’re far from finished. In fact, we’re just getting started.

My Review:
3.5 stars — I think I might have enjoyed this one a bit more if I’d had dedicated time to read it, instead of it being broken up in little pieces whenever I had time in between other stuff going on in my life.

That being said, remember how I LOVED #Bae because it was so much more than *just* a huge epilogue??  Well, this one is basically just a huge epilogue.  I kept waiting for twists and turns and more character development, and I really didn’t get it.  We did get a few answers about Hopper’s past, but in general I felt underwhelmed…like I wanted more.

And honestly, while I love Hopper and Arrow together, things got a bit overdramatic in their relationship…over the top declarations and stuff like that.  And I couldn’t help but be a bit uncomfortable with the co-dependency that was their relationship.  In some ways I can see how these two damaged characters might form that kind of relationship, but it’s not my favourite, if that makes sense.

Now, it was not all over the top and crazy, don’t get me wrong.  If it was, I wouldn’t be rounding up.  I do LOVE epilogues, so it was super fun to see them together, loving each other, putting each other first, and actually getting to see the happily ever after.  I loved Hopper and Jace’s conversation near the beginning, I loved the proposal, I loved Arrow’s surprise for Hopper in Las Vegas…well surprises (honeymoon too).  I loved the wedding.

I do remember seeing people mention that this was not just an Arrow/Hopper story, so I wasn’t completely taken by surprise when their story finished at 70%…I kind of still wanted more, but I was satisfied.  And I do remember people mentioning that there is no more Trent and Drew story (though they do have cameos), so I wasn’t surprised about that either (though there was a tiny piece of my heart that held out hope for some reason).

And I actually enjoyed Josie and Jace’s extra bit of story.  I thought they had a bit more to say, and I actually almost got more out of their story than I was expecting.  Though their little bit of conflict was resolved fairly quickly in the end, but I still appreciated that we got to see them hit a stumbling block.  I loved the proposal, I loved Jace’s conversation with Josie’s Dad and the way it played out after that, I LOVED the wedding (and seeing Josie get some girlfriends in Rimmel and Ivy, Trent’s da bomb), and I thought that the hospital scene at the end was hilarious and a perfect end to their story.

So yeah.  I enjoyed it.  Just not as much as I was hoping to.  Trent and Drew remain my faves, but I’m glad that Ms. Hebert didn’t just slap something together for them just because fans were asking.  I hope she gets inspired, but I will wait for gold if it comes, and be satisfied if this is all I get if inspiration doesn’t strike.

4 thoughts on “#FinishLine by Cambria Hebert”