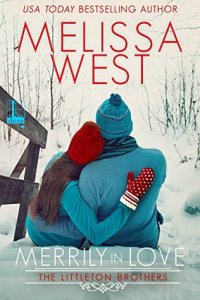 The Littleton brothers are as much a part of Crestler’s Key as the sun and surf, living the single life without a care. But love has a way of changing even the most determined bachelor’s mind . . .

Brady Littleton has left his reckless youth behind to become a man his brothers can count on. When the family dive shop needs to expand, he’s got the answer: buy the Christmas shop next door. Except the retiring owner’s goddaughter, Kylie Waters, has come back to town. She was Brady’s first kiss—his first everything—and she doesn’t want to sell. He’s got a solution to that too. Whoever makes the most sales by Christmas Day can take over the shop, fair and square.

Kylie resolved to put the youngest, wildest Littleton brother out of her head when he abruptly ended their relationship years ago. But the steady, gorgeous man he’s become is impossible to ignore. Especially once reminiscing leads to a kiss as hot and heady as mulled wine. Their deal means that one of them is going to lose out on a dream…unless Christmas Day brings the gift of a sweet, surprising second chance…

This one had its ups and downs for me, but I finished it with a smile on my face, and shed a few tears (well, more than a few, but I’m blaming PMS for the overreaction), so I’m calling it a win.

Both Kylie and Brady spent a lot of time aggravating me.  But I also felt for both of them.  Kylie with her fear of abandonment issues.  Brady with his over the top sense of guilt when it came to his family.  So while I wanted to smack them for some of the decisions they made, and how long it took for them to grow, I also felt for them and how their past and choices had scarred them.

And even as aggravating as they both were, they were also really endearing!  They could be really sweet, and some of the moments when they were together actually had me sighing in happiness and swooning.  You can’t go wrong with swooning.

Honestly, the only reason it’s not a full 4 stars is that I always find it aggravating (jeez, is that like my word of the day or something?) when authors elude to something in the past, but don’t just explain it to the readers.  Like in this book, we know something happened to break up our characters, break both of their hearts, have them each blame the other, and develop some animosity.  But the author just kept teasing us with it, occasionally dropping breadcrumbs.  Eventually it was basically explained, but it’s the kind of literary technique that just makes me want to abandon a book…because I spend so much time wondering what happened, that I just want to skip pages to find out.  Not always, I do get that there are certain instances where it makes sense, but I honestly don’t understand what the point was of keeping the reader in the dark in this case.  But I’m about to get ranty about something that’s really rather small, so I’m gonna stop.

I must say, I did NOT like either of Brady’s brothers…they were kind of selfish and not understanding.  I got their worry, but they were kind of dicks about some stuff.  However, Brady’s parents were da bomb.  And Franny and Ally rounded out our fabulous secondary characters nicely.

So yeah.  Some aggravation, but a WHOLE LOT of swooning too.  I mean come on, the whole ending was one big swoonfest.  So all in all a winner.

2 thoughts on “Merrily in Love by Melissa West”