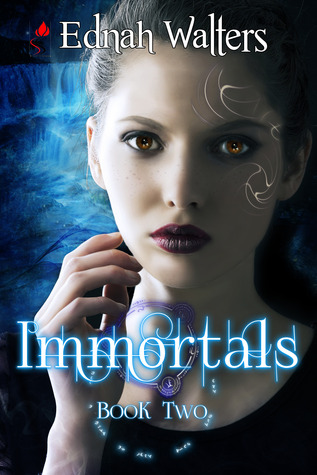 Synopsis: Nothing can stop Raine Cooper when she wants something…
Raine finally knows that her gorgeous neighbor, Torin St. James, is a legend straight out of Norse mythology, and that her feelings for him are strong. Torin is crazy about Raine too, breaking the one rule he lives by: Never fall for a mortal. The problem is he no longer remembers her, his memories erased by Norns—Norse destiny deities—to punish her for defying them.

So Raine comes up with a plan…
She will make Torin forget his one rule a second time and fall in love with her all over again.
But she quickly learns that well-laid plans do not work when dealing with deities and supernatural beings. Desperate, Raine makes choices that could not only tear her and Torin further apart, but lead to the destruction of everything and everyone she loves

The beginning of this book was awesome.  I enjoyed Raines efforts to get Torin to remember.  Torin, bless his heart, tries his best to resist her advances but he quickly succumbs to her charm.  This book has a few different storylines that I had a hard time separating from each other.  I can be dense at times but for me it was a bit to sort though, especially when the memories get erased things start to get a bit sketchy.

Raine has some guts to go up against the Norns, those breezies are scary.  Who wants to cross paths with the Fates? Not me, I’m cool.  One thing I didn’t like was how she gave up on Torin in the beginning so quickly. Come on!  You act like you love him, then don’t give up.  She redeemed herself though, so I gave her a pass on her faulty ways.

I really feel bad for Eirik though.  Even more than Torin, poor kid can’t catch a break. Not only is his former girlfriend not interested in him anymore, but he can’t control his emotions; AND someone is out to get him!  The plot twists are ripe in this installment though, I was pretty blindsided at the end.

All in all, a good read, it’s YA Mythological so it’s appropriate for 16 and up in my opinion.  This is one of my top ten series to recommend.