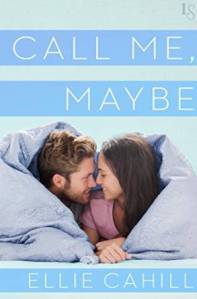 “Ellie Cahill is definitely one to watch!” raves bestselling author Cora Carmack, and this steamy, upbeat modern romance about connecting in all the best ways proves it once again.

Clementine Daly knows she’s the black sheep. Her wealthy, powerful family has watched her very closely since she almost got caught in an embarrassing scandal a few years ago. So when Clementine’s sent on a mission to live up to the Daly name, politely declining isn’t an option. Of course, the last thing she does before boarding the plane is to grab a stranger’s phone by mistake—leaving the hunky journalist with her phone. Soon his sexy voice is on the line, but he doesn’t know her real name, or her famous pedigree—which is just the way Clementine likes it.

Despite all the hassles, Justin Mueller is intrigued to realize that the beautiful brown-eyed girl he met at the airport is suddenly at his fingertips. They agree to exchange phones when they’re both back in town, but after a week of flirty texts and wonderfully intimate conversations, Justin doesn’t want to let her go. The only problem? It turns out that Clemetine has been lying to him about, well, everything. Except for the one thing two people can’t fake, the only thing that matters: The heat between them is for real.

My Review:
4 stars — I received an eARC of this book from NetGalley!

Another book where I was epically sucked in for the first half (or more) of the book, and just did NOT want to put it down until I was finally falling asleep, and then somehow in the last 40% it just did not live up to the 5 star start.  Again, like the previous 2 books I’ve read, these are compelling reads that I truly liked, I was just caught off guard when it ended and I only felt 4 star feelings for it, when it had a 5 star start.

So what had me clamouring for more in the beginning?  OMG Clementine was soooooo me!!  Seriously, she spoke to me so much as a character.  She’s going to speak to a lot of readers too, b/c she’s an avid reader who is PASSIONATE about her reading, reads voraciously, has a book blog, loves the whole community surrounding reading, etc…  Basically she’s a fangirl.  And I absolutely loved watching her preemptively defend reading romances — I was like “GO GIRL!”  But it wasn’t just this obvious similarity that sucked me in.  She was also a girl who didn’t know her place in the world and what she wanted to do with her life, but felt so much pressure to contribute to the world in some way.  I can totally vibe.  I’m lucky enough to be a “trophy wife” who gets to spend my time reading and doing all of the fangirl things I love to do, but I still feel that invisible pressure that I’m not living up to some expectation.  Some of us just live a quiet life and are satisfied with that.  So I truly felt for her and what she was going through.  I almost would have liked to see more on that aspect of the story…but it was kind of pushed to the side in favour of the romance.  Which is normally the part that intrigues me the most, but I guess I just missed a little bit of the resolution in that part of her life…b/c it started off being so important, and I just wanted more in the end.

And then there’s Justin….  OMG, what a swoony guy.   He could be so unbelievably sweet, and I just loved the freshness of their romance with each other.  It was very honeymoon-esque, but I loved that about it.  But truthfully?  I wanted more from him too.  I honestly would have loved to have both POVs in this story, b/c I wanted to know so much more about him, and I really felt like that was missing.  What sucked him in about Clementine?  What made her different?  What was he feeling?

In the end I think it was Clementine’s insecurities that turned me off a bit.  I sort of got where she was coming from, but at the same time I just wanted to smack her.  I know you’re supposed to feel that way, but it just made me lose a bit of faith in her as a character…maybe b/c I was vibing so much with her in the beginning that it was harder to take in the end?  Even as insecure as I am, I don’t think I would have behaved in the same way.  And I guess their resolution as a couple didn’t completely work for me.  It was so strange and volatile.  I don’t know.  Something.  Something something something.

So yeah, as usual I look back at my review, and it feels more negative than the experience really warrants.  This is HONESTLY a solid 4 star book for me.  I truly laughed and smiled and swooned and even cried.  I guess I just keep feeling the need to explain where things went wrong, even in books I enjoyed.  I think I need to work on that….

One thought on “Call Me, Maybe by Ellie Cahill”