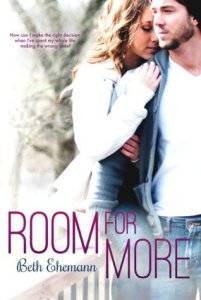 Four years ago, my dreams were shattered in an instant.

Three months ago, I found something I haven’t had in years.
Hope.
That hope came in the form of a sexy, carefree hockey player named Brody Murphy. He swooped in and won me over with his big heart and the way he cared for me…and my girls. When they look at him, they see the father they’ve never had.

Now, my past and present are colliding and the outcome might just be too much for me to bear. Can I make the right decision when I’ve spent my whole life making the wrong ones?

My Review:
3 stars — Well, I was already not feeling the first book upon rereading it, so I probably wasn’t in the right mood for this sequel…but I wanted to finally finish this series, you know?  It wasn’t bad by any means, but I just wasn’t captured.  It felt kind of blah for me.  It was probably largely just a mood I was in, I just didn’t read anything outstanding.

I think the biggest problem for me with this book is that the major conflict came from Kacie not telling Brody about encountering Zach.  It’s a common trope for books, and I read them a lot, so it’s not like it’s a huge no-no for me.  But occasionally it does get to me, and this was one of those times.  It’s hard to read a whole book where the problem is that the characters aren’t talking and being honest.  And in the end I wasn’t super impressed with how it resolved…

I also didn’t quite get the inclusion of the drama with Brody’s parents…it felt unnecessary and I’m not sure what we learned from it.

I loved the sweet times between Brody and Kacie…and Brody was adorable with the twins.  And in the end Zach wasn’t as predictable as I expected him to be — he actually had a valid story.

On a totally stupid TINY sidenote — it really irked me when Alexa said she wasn’t going to have kids and Kacie was all like “you’ll change your mind”.  I realize that Kacie knows Alexa much better than I do, but as someone who genuinely doesn’t want kids, it just irked me that Kacie blew it off like that.  But again, Kacie knows Alexa better, so I’m totally blowing this all out of proportion.

So yeah.  Will read the final novella, but it looks like it’s not a book I’ll need on my shelf.  Ah well, chalk another one up to my bad reading mood.

3 thoughts on “Room for More by Beth Ehemann”