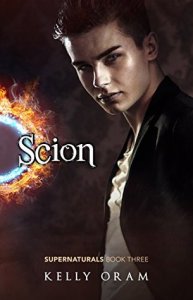 Russ Devereaux used to have it all—loving father, beautiful best friend, a carefree life in a town he loved, and strong magic. He was the king of his happy universe. Five months ago, that life was taken from him. Do not pass Go. Do not collect two hundred dollars.

He’s spent months fighting back and building himself a new life, in a new city, with new friends he now considers family. But suddenly, his new life might be in jeopardy of getting shot straight to hell just like the last one. Literally, this time.

He’s discovered power inside of him—an ancient, dark power that he shouldn’t have, can’t explain, can’t control, and definitely needs to keep secret. He needs answers, but before he can get them, he finds himself arrested and on his way to face the supernatural council. The same council that stole everything from him the first time.

As Russ struggles to keep his new power under wraps, his old life and he new one are about to collide and it’s bound to be explosive. He may not have all the answers he needs, but one thing is certain: he’ll be damned if anyone is taking his new life from him. That is, if he’s not just plain damned.

My Review:
4.5 stars — Or maybe just 4….so hard to decide.  You see, I’m starting to figure out how these books are going, and I need my HEAs.  NEED them.  And with the POVs switching each book, I’m feeling a bit gypped.  But at the same time, I’m loving the books otherwise.  GAH!!!  My romance loving heart is taking a beating.  Seriously.

OK, after that vague introduction, I really did love Russ’s story.  There was just so much to it.  And holy cow, can one character get more crap piled on him?  I don’t think it’s possible.  Especially when Ms. Oram makes him so lovable (in a jerk kind of way).  I mean, his bromance with Ethan is worth the price of admission alone.  What a fabulous first few chapters.  I was just squeeing.  Russ is just so hilarious and adorable, like a bad puppy that you just can’t scold.

And then the story just took off in directions I wasn’t expecting!!  I mean wow.  And Clara?  Who knew right?  That came out of left field for me, in the best possible way (though I will admit that I was a little disappointed that Russ wasn’t more skeptical of his feelings for her and how weird that all was).  And of course I wanted MORE MORE MORE!!  I have so many questions!!  And I’m still feeling unfulfilled.  I am strangely thankful that Ms. Oram announced that there are going to be 2 more books instead of just the one, b/c it sounds like my unfulfillment is about to get fulfilled times 2.  OH PLEASE.

Sometimes it was hard to watch these characters not see the clues before them.  I was almost yelling at them to figure out who the big bad was after some characters go missing.  I mean seriously.  But on the other hand, oh dear lord what a ride!  So much great action, so much emotion!!!  EMOTION EVERYWHERE!!!  AND YES I KNOW I’M NOT MAKING ANY SENSE!!!

OK, so yes.  I’m still meh on the first book and Dani and Gabe.  But books 2 and 3 have successfully sucked me in in spite of my confusion and lack of fulfillment.  Now I get to wait along with all the other fangirls for more.  *sigh*  SO GOOD.

6 thoughts on “Scion by Kelly Oram”