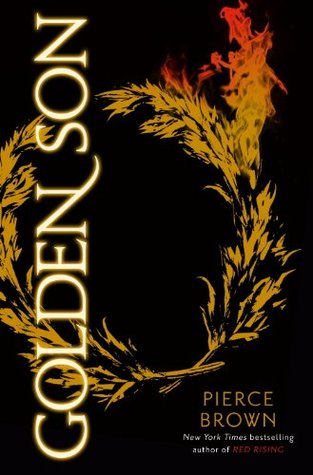 Blurb: As a Red, Darrow grew up working the mines deep beneath the surface of Mars, enduring backbreaking labor while dreaming of the better future he was building for his descendants. But the Society he faithfully served was built on lies. Darrow’s kind have been betrayed and denied by their elitist masters, the Golds—and their only path to liberation is revolution. And so Darrow sacrifices himself in the name of the greater good for which Eo, his true love and inspiration, laid down her own life. He becomes a Gold, infiltrating their privileged realm so that he can destroy it from within.

A lamb among wolves in a cruel world, Darrow finds friendship, respect, and even love—but also the wrath of powerful rivals. To wage and win the war that will change humankind’s destiny, Darrow must confront the treachery arrayed against him, overcome his all-too-human desire for retribution—and strive not for violent revolt but a hopeful rebirth. Though the road ahead is fraught with danger and deceit, Darrow must choose to follow Eo’s principles of love and justice to free his people.

He must live for more.

I’ve seen her hanged a thousand times now as her martyrdom spreads across the worlds, city by city. Yet each time, it strikes me like a physical blow, nerve endings shivering in my chest, heart beating fast, neck tight just under the jaw. How cruel a life, that the sight of my dead wife means hope.

Part of me wishes I would remember only Eo. That my mind belonged to her, so I could be like one of those knights of legend. A man so in love with one lost that he closes his heart to all others. But I am not that legend. In so many ways, I’m still a boy, lost and afraid, seeking warmth and love. When I feel dirt, I honor Eo. And when I see fire, I remember the warmth and flicker of the flames across Mustang’s skin as we lay in our chamber of ice and snow.

A dread creature stitched from shadow and muscle and armor. Flowing, not running. Perverse. Like looking at a blade or a weapon made flesh. This is a creature that dogs would flee. That cats would hiss at. One that should never exist on any level above the first tier of hell.

She is different from her people. And when she tries to do as they do, it cracks her heart to the core. Looking at her, I know I was wrong. She is not a distraction. She does not compromise my mission. She is the point of it all. Yet I cannot kiss her. Not now when I must break her heart to break this empire. It would not be fair. I’ve fallen in love with her, but she’s fallen for my lies.

It is a humbling thing knowing someone cannot live without you, knowing that though they’ve betrayed you, they wish for nothing but absolution. And as he clenches my back, I wrap my arms around his armor and try not to cry myself. Even the cruel feel pain. And even the cruel can change. I hope this changes him. He could do so much, if only he would learn.

These Peerless thump their chests in salute to me. The monsters. They go with the wind, chasing power. But they don’t realize power doesn’t shift. Power is resolute. It is the mountain, not the wind. To shift so easily is to lose trust. And trust is what has kept me alive. Trust in my friends, and their trust in me.

If I can protect this city of Agea, if I can show them that there is a better breed of man, then just maybe I’ll win Agea’s heart. Capture it. Protect it. Be loved by those in it as I’m loved by my army. But first I must crack her open.

Some men have threads of life so strong that they fray and snap those around them. Enough friends have paid for my war. This one’s on me.

The political intrigue, outer space, the murder, the gore, the dystopian setting. I love this book. Its better than the first one. There is so much violence that is tempered with introspection.I can’t tell you how well written this book is.  I loved the first one immensely and never thought for a moment that the second could be so much better. I love being wrong!

There was depth in the first book.  The characters were well rounded and intense,  but in this one they go deeper.  We learn who is really with Darrow and how he navigates the fine line between successfully creating dissent among the political leaders and failure causing a civil uprising.

He is like an M&M.   A tough hard outer shell protecting the soft vulnerable inside. And I think he is delicious.   I love him for his faithfulness to his dead wife.  He is constantly weighing and measuring himself, trying to make sure his choices are what Eo truly stood for.  It was quite a beautiful  read.

There was nothing that was left out in this book.  The action scenes were spectacularly detailed.  The intrigue was substantial and I could piece together the different factions that were involved.  The love story was epic.  EPIC I tell you.  There wasn’t a lot of romance to speak of.  I know it sounds confusing but you must understand this is during a time of reform and the people are capable of great love but unable to express it and become involved till their nation is at rest. That’s the caliber of characters I was reading.  So brave of them to put aside their petty self interests for the great of their world, don’t ya think?

I can;t say enough about this book.  If you haven’t read it and are a fan of Sci-fi/Dystopian, this is the book for you!  If you can’t afford it, hit me up and I’ll see if it lets me loan it to you.  Everyone should read this series!!!  Can’t wait to get my greedy little hands on the next one!