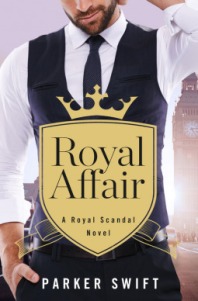 Behind the posh British accent, Dylan Hale possesses a down-and-dirty sexiness. Off-the-charts gorgeous, a ruthless architect . . . and did I mention he’s a future duke? Every time we touch, it’s wildfire. All need and lust and heat. But Dylan has rules: just sex, no one can know, and in the bedroom he gets complete control. All I have to do is follow the rules, because falling in love with Dylan Hale is all it would take to screw everything up . . . royally.

Also, I saw the conflicts coming a ways away, and they made me roll my eyes at times.  I’ve never been a fan of the misunderstanding thing, and Lydia (fabulous name btw) had a bad habit of jumping to conclusions.

And quite frankly, I hadn’t realized this would be a series all based on Dylan and Lydia, often times these series are about connected love stories.  But this is in fact a series of 3 books about Dylan and Lydia.  Which isn’t terrible by any means, but I felt like this one dragged a bit and could have been edited down, which makes me wonder how well the plot will be paced in the next two installments.

So saying all that, let’s get to the things I LOVED.  The chemistry and bantering between Dylan and Lydia.  THIS is where the author NAILS it.  I can’t tell you how delighted I was in Lydia’s sassy comebacks, pushing Dylan’s usual control.  That girl seriously made me laugh out loud.  And I enjoyed the bit of backstory about Lydia and how she came to be in the fashion industry, while not being super fashionable.  There is definitely some insta-love going on in this book, the relationship develops incredibly quickly, but I did feel like they had a connection outside of the sex, even if most of their connection WAS the sex.  I felt like we got to see them getting to know each other enough that I could believe there were deeper feelings involved.

And speaking of chemistry, while I did get a bit bored with all the sex, it was fairly smoking…particularly their first few encounters.  Heck their first kiss was just tingly.  And like I said, the dirty talking was very well done (especially given I recently read a book with unnatural dirty talking, I was like “THIS IS WHAT I’M TALKING ABOUT!”).

My problem lies in how to round this.  My hubby just shamed me about wanting to round up, saying how could I 4 star a book that bored me.  But he doesn’t understand how GOOD the good parts were.  Or how much characters and banter really weigh for me personally.  But alas, he is kind of right.  It was a bit predictable.  GAH!!!  Stupid logic!  So there you go.  Rambly review complete, you’re welcome.