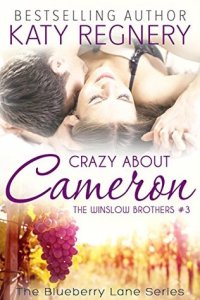 Crazy about Cameron is the third of four books about the Philadelphia-based, wildly-handsome Winslow brothers who are all on the look-out for love.

(Say what? Not so much…Brooks and Pres are OFF. THE. MARKET, and Chris is so distracted with his campaign, he can’t see what – or who – is right under his nose.)

With her stiff posture, black-rimmed glasses and chestnut waves in a tight bun, Cameron Winslow’s downstairs neighbor, Margaret Story, has long been the unaware star of his filthiest dirty-librarian fantasies. But with a floundering business eating up all his time, Cam doesn’t have the open road he’d need to date a lady like Margaret.

Margaret, who grew up down the road from Cameron, has always thought of him as a cross between a bully and a tease, as likely to pull her braids as pull her leg. But he’s grown up to be a smokin’ hot businessman, and Margaret can’t help daydreaming about what it would feel like to be under, um, with someone like him.

When hot-headed Cameron and buttoned-up Margaret start using the same shady contractor for apartment renovations, Margaret may find herself in some unexpected trouble, which forces long-hidden feelings to come out of hiding…and might just make way for two unlikely fantasies to finally come true.

Return to the world created in the English Brothers books with this fresh foursome of scorching hot Winslow Brothers!

My Review:
4 stars — OK, because I can’t seem to get over it, I’m going to get one of my annoyances out of the way at the beginning, and then commence the gushing.  If you choose to binge read this series (The Winslow Brothers section in particular) as I’m doing since I have the box set, and you have a mind for details, this series is going to bug you at least a little bit.  Because there are continuity errors.  A few little, one a bit bigger.  I first noticed one in Proposing to Preston, when the age of Preston was wrong and inconsistent with what we learn in Bidding on Brooks (he should have been 31 in Part One and 33 in Part Two).  But I didn’t say anything in my review, b/c it’s only something someone who pays attention to details would really notice, and really didn’t influence the story.  But the bigger continuity issue we run into in this book is kind of annoying since it’s what had me anticipating this story in the first place.  We first glimpse Cameron and Margaret in Bidding on Brooks at the auction, and there seems to be this playful war going on wrt the contractor.  Margaret even has a conversation with Brooks before the auction.  That part of the timeline in this book goes QUITE differently.  We never see her talk to Brooks, Cameron is not hiding from Margaret (and actually purposely approaches her), and the whole signing for tiles things doesn’t ever happen.  In fact the contractor war really doesn’t happen how I anticipated.  And there were a few other little ones (like when they moved to England)…  So if you have a mind for details and this kind of thing would annoy you, I suggest spacing out the reading of this series so that you forget that stuff by the time you get to this book.  Or at least be forewarned and forearmed.

OK.  Sorry.  That was a big ole pile of word vomit.  But I needed to get it off my chest before I could get to the good stuff, b/c my brain is, quite frankly, stupid.  It doesn’t help that I’ve recently finished two beta reads, so that switch was still on in my brain.  And, shake it off…

So while this book did not go how I was anticipating, I really actually LOVED the way direction it took instead!!  Like I would have enjoyed the story that was hinted, but I was equally enamoured with the story I got.  And part of that is just good ole likable characters.  Cameron was NOT what I expected.  Not that I knew much about him, but he was…DIRTY, and thoughtful, and FOCUSED (on Margaret), and vulnerable, and initially unhappy, and so sweet!! and protective, and even his impulsiveness came out in ways I wasn’t expecting.  Because he may have been impulsive, but it was like he wasn’t afraid to go after what he wanted once he figured out what that was…  And he went for it WITH ALL ENGINES FIRING.  Sexy as f*ck.  Like seriously, I just loved the way he saw Margaret, and wanted her, and how he resolved the things going on in his personal life, and how involved he became with the new direction and with his new relationship.

And Margaret broke my heart in places.  I’m a sucker for a shy, vulnerable, somewhat wounded heroine that has a core of strength, and we definitely get that in Margaret.  OMG, I had not anticipated her Father, and I seriously cried for her in places.  And while I may not have understood her desire for approval in spite of certain things, I bought it from her.  And I really appreciated that we saw how she would be when she could be the self she wanted to be.  I loved her passion for wine (even though GROSS), and just all the little bits that made up the real her.  She wasn’t what I was anticipating either, but I loved her all the same.

And I really enjoyed the romance that played out between her and Cameron.  It may have been fast at times, but it developed at a pace that made sense for these characters and their histories.

The bit of suspense and mystery that played a small secondary part really didn’t work for me, as it was fairly obvious from the start, and easy to put the pieces together.  And, I don’t know, I guess I was less impressed with the way it played out.  Not sure if it was necessary.

So honestly, despite the few little things that might have brought it down, the characters just drove this story home.  One more book!!

4 thoughts on “Crazy About Cameron by Katy Regnery”