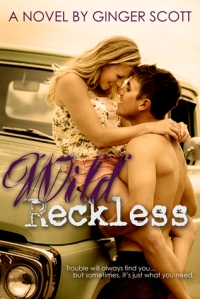 Kensington Worth had a vision for her senior year. It involved her best friends, her posh private school in downtown Chicago and time alone with her piano until her audition was perfected, a guaranteed ticket into the best music programs in the world.

Instead, a nightmare took over.

It didn’t happen all at once, but her life unraveled quickly—a tiny thread that evil somehow kept pulling until everything precious was taken from her. She was suddenly living miles away from her old life, trapped in an existence she didn’t choose—one determined to destroy her from the inside, leaving only hate and anger behind. It didn’t help that her neighbor, the one whose eyes held danger, was enjoying every second of her fall.

Owen Harper was trouble, his heart wild and his past the kind that’s spoken about in whispers. And somehow, his path was always intertwined with Kensington’s, every interaction crushing her, ruining her hope for any future better than her now. Sometimes, though, what everyone warns is trouble, is exactly what the heart needs. Owen Harper was consumed with darkness, and it held onto his soul for years. When Kensington looked at him, she saw a boy who’d gotten good at taking others down when they threatened his carefully balanced life. But the more she looked, the more she saw other things too—good things…things to admire.

Things…to love. Things that made her want to be reckless.

And those things…they were the scariest of all.

My Review:
3.5 stars — Well, this book left me really torn.  The good stuff was REALLY REALLY GOOD.  Like really good (in case the capital letters didn’t sell you).  But the stuff that didn’t sit right with me is just hovering at the back of my brain, disallowing me from loving this book.

So what let’s do good stuff first.  I really love this author, and I love the way she can just drag out my feels and rip up my heart at times.  And she decided to go for the jugular right from the prologue.  I thought that the way she addressed Owen’s grief over his father, and the issues that he dealt with with his older brother was done REALLY well.  I really felt his confusion, and loss, and could kind of understand why he was such a dick and how he cultivated the attitude that he did, especially in the town he grew up in.  And my heart broke for everything that he was trying to do to protect his family.  And I could FEEL his pain.  Even though we don’t get in his head, I could feel it through Kensi.

I LOVED the way Kensi grew a backbone and remained steadfast with Owen through the tough times.  Even when her heart was breaking over things he was doing, she was still trying to be there for him, to try to pull him back.  And Owen was there for her too, trying to push her and not let her lose herself.

And I loved some of their sweet moments.  Particularly some of the sweet moments Owen had with Kensi, he could be so adorable because he just wasn’t used to normal relationships.  And hoo boy, when I eventually got on board with their chemistry, it was freaking hot!

I will also give a shout out to Grandpa, he was da bomb.  I wish we’d seen more of him.

OK, so that was all awesome.  I really did feel sooooo much with this book, and I enjoyed the moments when the characters surprised me and didn’t do what I expected.  BUT.  But…  *sigh*  While I *get* why Owen was a dick, some of the things he did to Kensi went too far for me to come back from, and I just couldn’t put him on my book boyfriend list.  It’s funny, b/c it’s not that I didn’t expect some of those bad things…he wouldn’t be an authentic “bad boy” if he didn’t have some slip ups, and people are complex creatures, so it’s reasonable to assume that he wouldn’t get it right all the time.  But I didn’t get to see enough of his transition, where he started embracing more of the sweet side and letting it shine through.  I didn’t get to see his regret over some of those bad decisions, some of those dickish moments.  And I needed that.  I really really needed more than we were given.

And along those same lines, b/c of the horrible initial encounters between the two, I didn’t understand what drew them together.  I get that she thought he was cute, but she was also terrified of him, so I needed some moment or action from him that changes her mind.  And not being in Owen’s head, I honestly don’t know WHAT he was thinking about Kensi.  I don’t know what attracted him to her.

And there were other little things.  Like Kensi’s side story was actually really heartbreaking, but I felt like it fell to the wayside in favour of the Harper story.  Which is fine, but then why have it at all?  It felt like it was unnecessary if you weren’t going to give it time and attention.  And while I get that she’s a teenager, I didn’t always appreciate how she talked to her Mom and didn’t seem to care about her, and I guess I just needed her to apologize and grow in that relationship.  It’s not that I didn’t agree wholeheartedly with Kensi, but there should be some respect there, or it should at least develop.  And I was kind of disappointed with how focused Kensi was on Owen, to the exclusion of her new friends.  It didn’t really feel healthy.  I guess that’s it, a lot of the things that bothered me were because they didn’t feel healthy.  Which happens in real life, but then I want some resolution to them, you know?  I want my characters to realize it’s not healthy and grow.  And I kind of felt bad for Morgan.  If you don’t remember who she is, then that’s exactly my point.  Why introduce an element, and then let it flounder.

I did really love Andrew though, so I’m excited to read his story.  *fingers crossed* that the little things don’t get in the way of my enjoyment on that one too.  I actually can’t decide how to round this one.  Up because I love the author and I loved all the feels and the chemistry?  Or down because the unhealthiness was too much?  Hmmm…