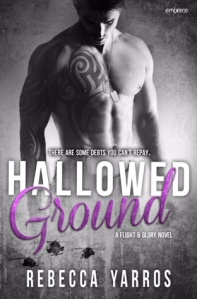 There are some debts you can’t repay.

Josh Walker is loyal, reckless, and every girl’s dream. But he only has eyes for December Howard, the girl he’s craved since his high school hockey days. Together they have survived grief, the military, distance, and time as they’ve fought for stolen weekends between his post at Ft. Rucker and her college at Vanderbilt. Now that Josh is a medevac pilot and Ember is headed toward graduation, they’re moving on—and in—together.

Ember never wanted the Army life, but loving Josh means accepting whatever the army dictates—even when that means saying goodbye as Josh heads to Afghanistan, a country that nearly killed him once before and that took her father. But filling their last days together with love, passion, and plans for their future doesn’t temper Ember’s fear, and if there’s one thing she’s learned from her father’s death, it’s that there are some obstacles even love can’t conquer.

Flight school is over.
This is war.

My Review:
4 stars — I will preface this review by saying that I think my enjoyment was marred slightly by having to set this book aside for a few days while I went on a roadtrip, and then since I was already out of the story, I also fulfilled an ARC read that I had on my plate.  I hate doing stopping a book partway, but I just had no choice in this case.  I’m not sure if it affects my opinion of the book on a whole, but I wouldn’t doubt I would feel better about my rating if I’d been able to read straight through.

Now, with that personal crap out of the way, on to the actual review!!  I absolutely loved Josh and Ember’s love story from Full Measures, and so I wasn’t sure how I’d feel knowing that they were going to likely be going through more crap.  And oh boy howdy, did they.  It was definitely an emotional journey that had me crying on multiple occasions (heck almost right at the prologue).  Ms. Yarros knows how to get you right in the feels and really see what the life of a military family can be like.  I can’t imagine it, and I can wholeheartedly say that I would not be strong enough to endure it, so I admire them all the more.

I loved all the good moments that we did get in this novel (Jagger and Paisley on the side, Will being a part of the group, the final weekend before deployment for Josh, and obviously the ending).  But this was not a book full of a lot of sweet moments.  This was a book featuring a couple truly struggling to keep it together.  And that was almost a bit more heartbreak than I could take.  And while it was epically realistic in so many ways, my literary heart had a hard time watching them have the same argument over and over again…watching Josh not learn anything over and over again.  It’s hard to be a reader and see people making obviously bad choices and yet they don’t see the same thing.  And I just wanted something to finally take, for something to finally get through to the two of them.  And like I said, this is honestly how it happens in real life with many couples, but as a reader it was hard to read about over and over with little reward.  Not to say there wasn’t a great reward, but it was starting to be too much.  Hence the 4 stars instead of the 4.5 stars I could see this book getting from me if that hadn’t been the case. (which tells you that this story was still amazing, just a bit harder for me than the first 2 books)

So definitely a strong conclusion to the series.  A tiny part of me wanted a bit more Jagger time, but that’s just because I’m drawn to that character and I’m greedy.  If you like emotionally impactful romances with complex characters, then I highly recommend you check out this series and fall in love.  Can’t wait to see what Ms. Yarros has in store for us next.